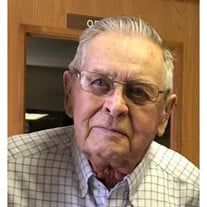 Sutton resident Aaron Griess, 89, passed away Saturday, April 11, 2020, at the Sutton Community Home in Sutton. Due to the COVID-19 restrictions, a private family funeral service will be conducted Friday, April 17, 2020, at Sutton Memorial Chapel in Sutton, NE with the Free German Reformed Salem Church Elders officiating. Services will be live-streamed from Sutton Memorial Chapel's Facebook page beginning at 10:00 a.m. Private interment will follow at the Free German Reformed Salem Church Cemetery near Sutton, NE. Visitation will be Thursday, from 1 p.m. - 8 p.m., at Sutton Memorial Chapel in Sutton. In lieu of flowers, memorial contributions may be directed to the family to be designated later. Aaron was born April 13, 1930, near Grafton, NE in Fillmore County to Martin P. and Johanna (Griess) Griess. He was united in marriage to Ruth Griess on March 14, 1957, and they were married for 63 years. Aaron was called to service from 1952 until 1954 serving in Korea. Aaron returned home from the service and began farming. He would farm his whole life until retirement. He would still help his sons with farming after he retired. Aaron enjoyed going to the Legion Club and socializing with family and friends. He is survived by his wife of 63 years, Ruth of Sutton, NE; sons, John and wife Christy Griess of Grafton, NE; and Don and wife Kathy Griess of Grafton, NE; four grandchildren, Jacob Griess of Grafton, NE; Caitlin Griess, Heidi Griess, and Adam Griess all of Grafton, NE; He was preceded in death by his parents, Martin and Johanna; infant son, Aaron, Jr.; two brothers, Roy and Calvin Griess; sister, Loretta Huber; and numerous brothers-in-law and sisters-in-law.

The family of Aaron Griess created this Life Tributes page to make it easy to share your memories.

Send flowers to the Griess family.