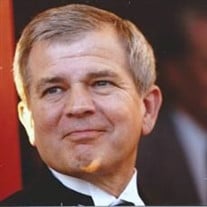 Sutton resident Alan Lee Brown, 65, died Thursday, September 27, 2012, at Mary Lanning HealthCare in Hastings, NE. Funeral services will be 10:30 a.m., Tuesday, October 2, 2012, at the Federated Church in Sutton, NE with Rev. Eric Biehl officiating. Interment will follow at the Sutton Cemetery in Sutton, NE., with military honors by the American Legion Post #61, Sutton, NE. Visitation is Monday, from 1 p.m. - 8 p.m., with the family present from 6 p.m. - 8 p.m., at Sutton Memorial Chapel in Sutton, NE. In lieu of flowers, memorial contributions may be directed to the family to be designated at a later date. Alan Brown was born January 20, 1947, in Lincoln, NE., to Forrest and Verna (Lamb) Brown. He lived in Western, NE., before moving to Sutton, NE., at age 2 when Forrest and Verna bought the grocery store from the Schmidt brothers. He graduated from Sutton High School in 1965, and then attended Nebraska Wesleyan University, majoring in business. On June 1, 1969, he married Linda Hadfield in Fullerton, NE. He was drafted 3 months later and served in the United States Army in Okinawa, Japan. When he returned, he graduated from college in 1971, and was honorably discharged from the army in 1975. Alan and Linda moved back to Sutton in 1972, and Alan owned and operated the Brown's Thrift Store with his father and brother, Mark. Alan had 3 children with Linda; Holly, Seth, and Heather. Linda passed away June 30, 2000, and Alan married Huldah Burklund April 13, 2002, in Farwell, NE. He has been an active member of the Sutton Federated Church and American Legion Post #61. We will remember Alan's joy for celebrating the 4th of July, the love for his family, his kind blue eyes and warm smile. His subtle, witty quips were a joy to those who knew and loved him. Alan is survived by his wife, Huldah of Sutton, NE; daughter, Holly Lincoln and significant other David Mavigliano, of Lincoln, NE; son, Seth Brown and wife Jennifer of Palmyra, NE; daughter, Heather Osborn and husband Daniel of LaVista, NE; 6 grandchildren, Justin Lincoln; Shayna Lincoln; Ethan Brown; Isabella Brown; Reece Osborn and Ryan Osborn; brother, Mark Brown wife JoAnn of Sutton, NE; mother-in-law, Phyllis Hadfield of Lincoln, NE; sister-in-laws, brother-in-laws and several nieces and nephews. He is preceded in death by his parents, wife, Linda Brown; father-in law, Doug Hadfield and mother-in-law Lou Burklund.

The family of Alan Lee Brown created this Life Tributes page to make it easy to share your memories.

Send flowers to the Brown family.