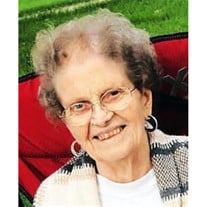 Former Clay Center resident, Alorice Renee (Linder) Jaeger, 87, passed away Monday, October 2, 2017, at Mary Lanning Healthcare in Hastings, NE. Funeral services will be held at 10:30 a.m., Friday, October 6, 2017, at the United Church of Christ in Clay Center, NE with Rev. Bill Harrold officiating. Interment will follow at the Clay Center Cemetery. Visitation will be Thursday, from 1 p.m. - 8 p.m., with the family present from 6 p.m. - 8 p.m., at McLaughlin Funeral Chapel in Clay Center. Memorial contributions may be directed to the United Church of Christ in Clay Center, the Clay Center Super Seniors or for Alzheimer's research. Alorice Renee (Linder) Jaeger was born January 20, 1930, north of Sutton, Nebraska to John and Ruth (Nolde) Linder. She received her education in Sutton, and recently attended her 70th high school class reunion from Sutton High School in 1947. She married Dwight Jaeger on May 29, 1949, carrying peonies from her mother's garden. Alorice taught country school near Clay Center until she married and later worked at the county clerk's office at the Clay County Courthouse. She was a member of the United Church of Christ and belonged to the Happy Homemakers Extension Club, Clay Center Super Seniors, the Order of the Eastern Star, the Ladies Auxiliary of American Legion Post 87, and the Clay Center Garden Club. She was active in many other community activities and played piano and organ at numerous social and religious events around the Clay Center community. She is survived by her sons, William (Elaine) Jaeger of Clay Center, NE; Thomas (Vikki) Jaeger of Omaha, NE; Dennis (Joyce) Jaeger of Loveland, CO; seven grandchildren, ten great-grandchildren, two sisters-in-law, and nieces and nephews. She was preceded in death by her parents; her husband, Dwight Jaeger; her brother, Theirl Linder and her great-grandson Ezra Workman.

The family of Alorice (Linder) Jaeger created this Life Tributes page to make it easy to share your memories.

Send flowers to the Jaeger family.