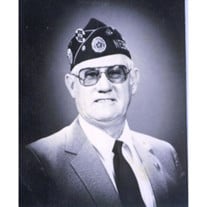 Former Clay Center resident Alva Joseph Hankins, Jr., 84, died Tuesday, August 16, 2011, at Memorial Hospital in Aurora, NE. Funeral services will be 2:00 p.m., Friday, August 19, 2011, at McLaughlin Funeral Chapel in Clay Center with Rev. David King officiating. Cremation will take place after the service. Inurnment will be at a later date at Fort McPherson National Cemetery in Maxwell, NE. Visitation will be Thursday, from 1 p.m. until 8 p.m., with the family present from 5 p.m. until 7 p.m., and Friday from 9 a.m. until the time of the service at McLaughlin Funeral Chapel in Clay Center. Memorial contributions may be directed to the American Heart Association. McLaughlin Funeral Chapel is in charge of arrangements. Alva was born May 5, 1927, in Imperial, NE., to Alva, Sr. and Elta May (Humphrey) Hankins along with two brothers and five sisters on his grandparent's farm. He served in the United States Army as a lineman on telephone/telegraph lines in Germany from 1951 to 1953 during the Korean War. He volunteered as a fireman in Overton, NE during the early 1960's. He was a Post Commander for the American Legion in Kearney, NE in 1987, 1988 and 1989. He was also a lifelong member of the V.F.W., enjoyed volunteering at Old Trusty Days in Clay County and was a well known resident in Clay Center. He always enjoyed his friends at the morning coffees. He married Betty Ann Fenton on November 25, 1950, and to this union three sons were born. Alva remarried Audrey Schulz on February 12, 1983. Alva had been a resident at Rose Brook Care Center since 2008 He is survived by his sister Alice Deeden of Columbus, NE; sons, Joe and wife Deb Hankins of Clay Center, NE; Jake and wife Cari Hankins of Clay Center, NE; Jeff and wife Tanya Hankins of Juniata, NE; and their mother Betty Hankins of Hastings, NE; three grandchildren, Jordan Hankins, Krysten Moreno and Nickolas Hankins. He was preceded in death by his parents, second wife Audrey, two brothers and four sisters

The family of Alva Joseph Hankins, created this Life Tributes page to make it easy to share your memories.

Send flowers to the Hankins, family.