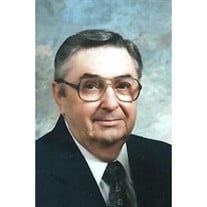 Sutton resident Arthur Ehly, 92, passed away Thursday, February 12, 2015, at the Sutton Community Home in Sutton, NE. Funeral services will be 1:30 p.m., Sunday, February 15, 2015, at Sutton Memorial Chapel in Sutton, NE with the Free German Reformed Salem Church Elders officiating. Interment will follow at the Free German Reformed Salem Church Cemetery near Sutton, NE. Visitation will be Saturday, from 1 - 8 p.m., at Sutton Memorial Chapel in Sutton, NE. In lieu of flowers, memorial contributions may be directed to the Sutton Community Home. Arthur was born July 4, 1922, in York County, NE to Henry and Margaret (Griess) Ehly. He was baptized and confirmed in the Free German Reformed Salem Church where he was a lifetime member. Arthur attended country school and graduated from Sutton High School in 1941. In 1942, he was drafted into the United States Army. He was part of the Military Police Escort Guard and served in the South Pacific, the Philippine Islands and Korea for three and a half years. In 1954, he married Rose Hofmann and they celebrated their 61st anniversary on February 3, 2015. Arthur owned and operated a liquor store in Sutton for several years. Later, he was employed at the Navy Depot in Hastings, NE and Grand Island, NE and had also worked as a custodian for Sutton Public Schools. Arthur was a member of the Sutton American Legion Argonne Post #61 in Sutton, NE. He is survived by his wife, Rose of Sutton, NE; and numerous nieces, nephews, friends and other relatives. He was preceded in death by his parents; brothers, Jonathan and Theophil and sister, Dorothy Keller.

The family of Arthur Ehly created this Life Tributes page to make it easy to share your memories.

Send flowers to the Ehly family.