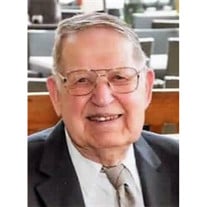 Former Fairfield and Hastings resident, B. Charles Johnson, 95, died Monday, December 12, 2016, at the Harvard Rest Haven in Harvard, NE. Funeral services will be held at 10:00 a.m., Thursday, December 15, 2016, at the Hastings Evangelical Free Church in Hastings, NE with Pastor Matt Sass officiating. Graveside services will be 2:30 p.m., Thursday, at the Fairfield Cemetery in Fairfield, NE. Visitation will be Wednesday, from 1 p.m. until 8 p.m., with the family present from 6 p.m. until 8 p.m., at McLaughlin Funeral Chapel in Clay Center, NE. Memorial contributions may be directed to the Fairfield Fire Department, Clay Center Christian Church or the Hastings Evangelical Free Church. Contributions may be mailed to 31091 Road M, Clay Center, NE 68933. Mr. Johnson was born April 5, 1921, at the home of his parents, Benjamin F. and Mona A. (Mouser) Johnson near Fairfield, NE. He was baptized in the Blue River in 1932 and was a member of the Church of God. He graduated from Fairfield High School in 1938. He worked on the home farm with his father and for himself until 1948. He married Betty J. Selby of Fairfield on November 26, 1948. They spent that winter in California where he worked as a carpenter and then moved back to the area west of Fairfield where they lived and farmed until their retirement in March 1987. They managed a motel in Hastings for a short time and then traveled the United States in their motor home until 1990 at which time they settled in Hastings. Mr. Johnson then worked as the maintenance manager for Sunnyside Home in Hastings until his retirement in 2001. He continued to live in his own home in Hastings until he moved to Harvard Rest Haven in October 2016. The Johnsons were active members of the Christian Church in Clay Center where Mr. Johnson served first as deacon and then elder. He was active in the Fairfield community serving on various boards, including 30 years with the Fairfield Fire Department. Survivors include his four children, Lee and Linda (O'Connor) Johnson of Fairfield, NE; Rebecca (Johnson) and Bruce Blair of Beaverton, OR; Keith and Teresa (Bitterman) Johnson of Glenvil, NE; and Wayne and Janis (Johnson) Johnson of Clay Center, NE; one sister, Alma Hatch of Anderson, IN; 14 grandchildren, Carolyn (Ryan) Erb, Lloyd (Sheena) Johnson, Timothy (Jill) Johnson; Suzanne Blair, Brian Blair; Seth (Melissa) Johnson, Jessica (David) Sheltrown, Aaron (Sara) Johnson, Hannah (Zach) Shefferd, Abby (Dean) Huebert; Nathan (Andrea) Johnson, Joseph (Madalyn) Johnson, Matthew Johnson, Krista Johnson; and 30 great-grandchildren. Mr. Johnson was preceded in death by his wife, Betty, on December 31, 2007, his parents and his four sisters, Ethel Christensen; Mabel Hakanson; Dorothy Knudson; and Doris Tazelaar.

The family of B. Charles Johnson created this Life Tributes page to make it easy to share your memories.