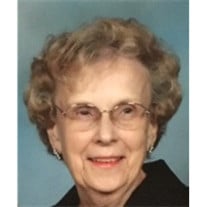 Former Clay Center, NE resident, Berneda "Babe" Thomas, 93, passed away Tuesday, May 3, 2016, at Heritage at College View in Hastings, NE. Funeral services will be 10:30 a.m., Saturday, May 7, 2016, at the United Church of Christ in Clay Center, NE with Rev. Harry Cross officiating. Interment will follow at the Clay Center Cemetery. Visitation with the family present will be Friday, from 4 p.m. - 5 p.m., at McLaughlin Funeral Chapel in Clay Center, NE. Memorial contributions may be directed to the United Church of Christ in Clay Center, NE. Berneda Anne "Babe" (Fitzke) Thomas was born March 22, 1923 in Harvard, Nebraska to Fredric William and Elizabeth Marie (Glantz) Fitzke. She received her education at Harvard Public Schools and graduated from Harvard High School in 1940. While in high school she had taken the appropriate classes to become a teacher, she passed the teaching exam and received her teaching credentials upon high school graduation and went on to teach at West Lynn School,  a K-8 one room school in rural Clay County,  for three years. She married C.Dale Thomas on October 22, 1943 in Sabetha, KS. She lived most of her life in Clay County, Nebraska, living for a short period of time in Norman, Oklahoma and San Diego, California while Dale was stationed there during WWII. They returned to live in Clay Center, Nebraska where they made their home and raised their children. Babe assisted Dale with the family hatchery and feed store as needed and in the fall of 1958 she went to work for the United States Postal Service working as a postal clerk until her retirement in 1983. Babe and Dale enjoyed traveling upon their retirement and enjoyed such venues as the 1984 Summer Olympic Games in Los Angeles, California and traveling to Alaska and Hawaii as well as many other states. They enjoyed gardening and always had a big garden which kept Babe busy in the kitchen canning lots of tomatoes, red beets and pickles. Another kitchen favorite Babe was well known for was her peanut brittle. Every year during November and December she would spend many hours making dozens of batches of peanut brittle to share with friends and family. She taught many people how to make peanut brittle over the years. Babe had quite a green thumb and had beautiful plants and flowers, both inside and outside. She loved animals, her favorites being cats and Boxer dogs. She would "accidentally" make extra oatmeal in the morning so that their dog could have some also, doctored up with butter and milk of course. She enjoyed following the Nebraska Cornhuskers and Clay Center Wildcat sports teams especially the volleyball team and loved the interaction with the youngsters at Clay Center High School. Babe was known not only for her friendliness and kind heart but also her sense of humor, quick wit and one liners. She was a member of the United Church of Christ of Clay Center, PEO, the Red Hatters, American Legion Auxiliary of Clay Center and Chat 'N Do Home Extension Club. She is survived by son and daughter-in-law, Greg and Coral Ann Thomas of Enid, OK; daughter and son-in-law, Sheila and Mike Grummert of McPherson, KS; daughter-in-law, Cheryl Thomas-MIller of York, NE; sister, Donna Hinrichs of Hastings, NE; brother, Charles Fitzke of Omaha, NE; nine grandchildren; 19 great-grandchildren and special friend Stephanie Hoyt. She was preceded in death by her parents; husband, C Dale Thomas; son, Steven Thomas; grandson, Jonathan Grummert; granddaughter, Paige Thomas and sister, Ardes Fitzke.

Former Clay Center, NE resident, Berneda "Babe" Thomas, 93, passed away Tuesday, May 3, 2016, at Heritage at College View in Hastings, NE. Funeral services will be 10:30 a.m., Saturday, May 7, 2016, at the United Church of Christ in Clay Center,... View Obituary & Service Information

The family of Berneda Thomas created this Life Tributes page to make it easy to share your memories.

Send flowers to the Thomas family.