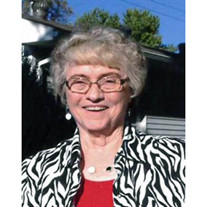 Former Clay Center resident Carol G. Hayes, 84, passed away Sunday, December 1, 2019, at Mary Lanning Healthcare in Hastings, NE. A celebration of life service will be conducted at 10:30 a.m., Saturday, December 7, 2019, at the United Church of Christ in Clay Center, NE with Rev. Del Klover officiating. The family requests red be worn to the service in honor of Carol's favorite color. Private family inurnment will be held at a later date. In honoring her wish to be cremated there won't be viewing or visitation. Memorial contributions may be directed to the family to be designated later. Carol was born May 30, 1935, in Clay Center, NE to George and Vera (Herrick) Nye. She graduated from Clay Center High School in 1953. She furthered her education at Hastings College and later taught school in Clay Center. In 1955, she married A. Vayle Hayes and 3 children joined in that union: Wade, Gordon and Kimberly. Carol was a member of the United Church of Christ where she taught Sunday School. She served on the Board of Directors and held offices in Eastern Star and Daughters of The Nile both in Hastings, NE and Mesa, AZ. She was appointed Grand Representative of the District of Columbia in Nebraska. Carol was President of the Women's Trucking Association of Nebraska in 1999 and was named Women of Distinction by the Nebraska Trucking Association. Carol held offices in P.E.O. and was a Den Mother the whole time her boys were in Scouts until they both received their Eagle Scout Badges. She is survived by her son, Gordon Hayes of Kenesaw, NE; daughter, Kim Aflague of Hastings, NE; brother-in-law, Bill Hayes and wife Marlys of Doniphan, NE; and a beloved grandmother to Seth Arthur Aflague of Hastings, NE and Emily Katherine Aflague and fiancé Jack Buck of Springfield, OR and numerous nieces and nephews. She was preceded in death by her parents; loving husband, Arthur Vayle Hayes; wonderful son, Arthur Wade Hayes; sister, Phyllis Woolen and brothers, Bill, Larry and Jim Nye.

The family of Carol G. Hayes created this Life Tributes page to make it easy to share your memories.

Send flowers to the Hayes family.