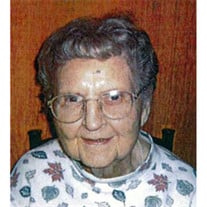 Sutton resident, Carolyn "Connie" Dee Woller, 98, passed away Friday, April 6, 2018, at the Sutton Community Home in Sutton, NE. Funeral services will be conducted at 10:00 a.m., Wednesday, April 11, 2018, at the Federated Church in Sutton with Rev. Mary Scott officiating. Interment will follow at the Sutton Cemetery. Visitation will be one hour prior to the service at the church. In lieu of flowers, memorial contributions may be directed to the Paul Woller Scholarship Fund at Sutton High School or the Sutton Community Home. Connie was born in Hastings, Nebraska and died 98 years later in Sutton Nebraska, thirty miles away from her birth site. Although this seems like a short trip, Connie, with her husband Paul, traveled worldwide with trips to Europe and all of the lower forty-eight states on their epic road trips. Her parents were Jesse M. Marsh of Missouri and Laura Holland, also from Missouri. Connie 's stepmother was Erma Marsh. Connie graduated from Hastings High School and attended Hastings College where she studied bookkeeping and secretarial arts. Connie's met her soul mate Paul while they were both attending Hastings College. On June 30, 1940, they were married in Grand Island, Nebraska. Together they had two sons; Paul of St. Michaels, MD and Bruce of Boulder, CO. Together Connie and Paul lived in Hemmingford, NE, Brighton, CO, Millikan, CO and Cortez, CO. During their time in Colorado Connie provided a boarding house environment to the many single male school teachers that worked with Paul. While living in Cortez Paul was drafted into the army, leaving Connie to raise their young son by herself. After Paul returned from the war in 1947, they moved to Sutton, NE. Connie worked as a legal secretary for Bottorf and Maser LLC and later was secretary to the Dean of Students at Hastings College. She was a member of the Federated Church of Sutton. Connie is past president and current member of Chapter BH PEO. Connie is survived by Paul and Beverly Woller of St. Michaels, MD and Bruce and Nel Woller of Boulder, CO as well as six grandchildren and seven great-grandchildren. Two sisters, Helen Easterbrook and Millie Davidson and her husband Paul, preceded her in death.

The family of Carolyn Dee Woller created this Life Tributes page to make it easy to share your memories.

Send flowers to the Woller family.