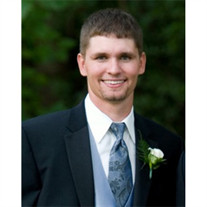 Cole J. Cooper Bergen, 27, passed away Saturday, July 30, 2016, in Sabetha, KS due to injuries sustained in an automobile accident. Rosary will be 7:00 p.m., Thursday, August 4, 2016, at St. Mary's Catholic Church in Sutton, NE. Mass of Christian Burial will be 10:00 a.m., Friday, August 5, 2016, at St. Mary's Catholic Church in Sutton with Father Robert Barnhill officiating. Interment will follow at the Saronville United Methodist Cemetery near Saronville, NE. Visitation will be Thursday from 1 p.m. - 5 p.m., with the family present from 2 p.m. -4 p.m., at Sutton Memorial Chapel in Sutton, NE. Memorial contributions may be directed to the family to be designated for a scholarship in Cole's name. Cole J. Cooper Bergen was born January 9, 1989, at Hastings, NE to Jack and Sherri (Hultman) Bergen. He graduated from Southern Valley High School, Oxford, NE in 2007, SCC Milford, September 2009 with a degree in building contruction, and UNL, May 2014 with a degree in Ag Education. Cole joined the Navy just out of high school and was a construction mechanic 2nd class (CM2 SCW). He served his country during Operation Enduring Freedom/New Dawn as a machine gunner for his convoy commander vehicle. He received the Navy Marine Corps achievement medal for actions in combat while in Afghanistan with NMCB 15. He served as safety supervisor for convoy security element and was a member of NMCB 22, 15, 17 and ACB1. From a young age, Cole enjoyed wood construction projects and put his talents to use as a part of the LAW Construction Crew. He began his teaching career this past year at Sabetha Public Schools, Sabetha, KS. He had a strong love for the kids and embraced the community that welcomed him as one of their own. He was a member of the Orleans Lions Club and was active in 4-H growing up. He is survived by his mother, Sherri Bergen of Orleans, NE; brother, Clint Bergen and wife Michelle of Lincoln, NE; brother, Chance Bergen and wife Lesley of Beatrice, NE; sisters, Cheyenne Bergen of Omaha, NE; Cierra Bergen of Hampton, NE; nephews and nieces, Atticus; Persephone; Thaddeus; Ophelia; Cash and Chapel; grandmothers, Joan Hultman of Sutton, NE; and Jean Lubeck of Alma, NE; numerous aunts, uncles, cousins, friends, special friend and mentor, Steve Winscot; and his furred companions George and Mabel. He was preceded in death by his father, Jack Bergen; grandparents, Lyle Hultman; Virginia and Ike Bergen; and Ralph Lubeck. He was an amazing son, brother to many, and beloved uncle. He had a servant's heart and was very loyal. He served our country, served the young students he taught at Sabetha, and most importantly he always served his family and friends.  His smile and laugh were infectious and he impacted everyone he met. His motto was measure twice and cut once unless it's trim. You were lucky if you had Cole on your side. There would be no one who would love greater, fight harder, or be more passionate than Cole. He truly was one of a kind. Cole was a quiet servant and an old soul.

The family of Cole Cooper Bergen created this Life Tributes page to make it easy to share your memories.

Send flowers to the Bergen family.