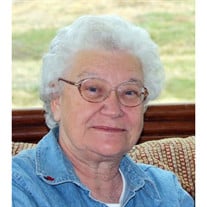 Hastings resident, Darlene Rose Gibson, 79, passed away Friday, April 14, 2017, at Mary Lanning Healthcare in Hastings, NE. Mass of Christian Burial will be held at 10:00 a.m., Tuesday, April 18, 2017, at St. Mary's Catholic Church in Sutton, NE with Father William Holoubek officiating. A Rosary will be prayed prior to the service at 9:30 a.m., at St. Mary's Catholic Church in Sutton, NE. Interment will be held at 2:00 p.m., Tuesday, April 18, 2017, at the Wilber Czech Cemetery in Wilber, NE. Visitation with the family present will be Monday, from 5 p.m. until 8 p.m., at Sutton Memorial Chapel in Sutton, NE. Memorial contributions may be directed to the family to be designated at a later date. Darlene was born July 23, 1937, in Wilber, NE to Frank and Rose (Plihal) Hayek. She graduated high school from Wilber Public School. On September 27, 1958, Darlene married Donald L. Gibson in Wilber, NE. Darlene and Don purchased G & L Transit of Grand Island, NE where they owned and operated the business for 17 years before retiring. After retiring she returned to being a full-time homemaker, caregiver, loving mother, grandmother and great-grandmother. Darlene and Don loved to dance, especially Polka's and would attend dances almost every weekend. She was an avid husker fan as well as a fan of Hastings College athletics. Most of all Darlene loved spending time with her family and friends. She especially enjoyed visits with her grandsons and great-grandchildren. She was a lifetime member of the American Legion Auxiliary, Ladies Auxiliary to the Veterans of Foreign Wars and Fraternal Order of Eagles. She was also a member of the Platt-Duetsche of Grand Island, NE. She is survived by her son and daughter-in-law, Dale and Patricia Gibson of Sutton, NE; grandson, Brett and wife Michele Gibson; great-granddaughter, Adalynn and great-grandson, Brayden all of Saronville, NE; grandson, Blake Gibson and fiancé Kayla Miller of Hastings, NE; brother, Irvin Hayek of Lexington, KY; sister-in-law, Mrs. Hilo Hayek (Liz) of Hastings, NE; nephews, Michael Hayek and wife Diane of Lincoln, NE; and Pat Hayek and wife Sharon of Hastings, NE. She was preceded in death by her husband, Don; parents; an infant sister and a brother, Milo (Mike) Hayek.

The family of Darlene Rose Gibson created this Life Tributes page to make it easy to share your memories.

Send flowers to the Gibson family.