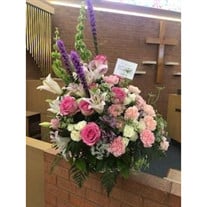 Former Sutton resident, Darlene Marie Vauck, 91, passed away Wednesday, September 9, 2020, at the Providence Place in Hastings, NE. Memorial services will be conducted at 3:00 p.m., Friday, September 11, 2020, at the Federated Church in Sutton, NE with Pastor Mary Scott and Mina Nutter officiating. Private family graveside services will take place prior to the service. In honoring Darlene's wishes there will not be visitation or viewing. Memorial contributions may be directed to the Federated Church in Sutton, NE. Due to the COVID-19 Directed Health Measure Phase III, we are limited to 50% occupancy for the Funeral Service and we will be practicing social distancing as indicated by the measure. Per the family's request, masks are encouraged to be worn at the Funeral Service. Darlene Marie Vauck was born August 5, 1929, in Grafton, NE the daughter of Herman Henry Ulmer and Martha (Nicolaus) Ulmer. She was educated in Grafton and was the president of her class when she graduated from Grafton High School in 1946. She was confirmed at Hope Reformed Church. On September 7, 1947, she married Ralph James "Bud" Vauck at the Federated Church. Darlene and Bud raised four daughters: Diane, Carol, Patricia, and Judy. The family lived in and around Sutton where Darlene worked as a homemaker and helped Bud with his farming and other enterprises. For several years she and Bud were co-owner/operators of the Carson Hotel in Sutton. Darlene supported her family's involvement in 4-H, enjoyed guiding and entertaining her young grandchildren, and was active in the women's circle at the Federated Church. During the difficult years of Bud's battle with brain cancer Darlene was the primary caregiver. She enjoyed and was highly skilled at embroidery, and her innumerable blocks of embroidery have enhanced the beauty of dozens of quilts. Darlene Vauck is survived by her brother, Harris Ulmer of North Platte, NE; daughters, Diane (John) Overturf of Edgar, NE; Carol (Ken) Friesen of Hampton, NE; Patricia (Mark) Metcalf of Sutton, NE; and Judy (Dan) Hoffman of Kearney, NE; grandchildren, Mina (Brett) Nutter of Geneva, NE; Jerry (Becky) Overturf of Sutton, NE; Leann (Adam) Smith of Lexington, NE; Keenan (Liz) Friesen of Sutton, NE; Bennett Friesen of Aurora, NE; Tuesday (Douglas) Hofts of Lincoln, NE; Garett (Andrea) Hoffman of Kearney, NE; and Stuart (Laura) Hoffman of Kearney, NE; fourteen great-grandchildren, and one great-great-grandchild. She was preceded in death by her parents, Herman and Martha Ulmer; infant brother, Maurice Lyle; husband, Ralph "Bud"; and grandchild, Clayton Metcalf.

The family of Darlene Marie Vauck created this Life Tributes page to make it easy to share your memories.

Send flowers to the Vauck family.