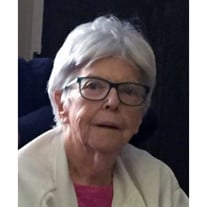 Fairfield, NE resident, Delilah Bea Tibben, 88, passed away after a short illness of cancer on Saturday, November 30, 2019, at the Harvard Rest Haven in Harvard, NE. Funeral Services will be conducted at 10:00 a.m., Tuesday, December 3, 2019, at the Zion Lutheran Church in Shickley, NE with Pastor James Moll presiding. Interment will be held following the funeral service at the Fairfield Cemetery in Fairfield, NE. Visitation will be 1 hour prior to the funeral service at the Zion Lutheran Church in Shickley, NE. Memorials may be directed to Mission Central - 40755 Co HWY E16, Mapleton, IA 51034, American Cancer Society or donor's choice. Delilah Bea Tibben was born on January 6, 1931, to Wallace and Nellie (Ziegler) Carter and passed away after a short illness of cancer on November 30, 2019, at the Harvard Rest Haven in Harvard, Nebraska at the age of 88 years old. She attended Marshalltown Public Schools and continued her education going to nursing school and graduating in 1950. After receiving her nursing degree, she worked as a traveling nurse and she moved to Manning, Iowa where she worked in the hospital caring for many people. Delilah married the love of her life, Eldon, on January 4, 1953, at the Zion Lutheran Church in Manning, Iowa. They farmed in Audubon County for Many years. They enjoyed roller-skating. To this marriage, one daughter was born and they adopted another daughter in 1965. Over the years, Delilah and Eldon, took in several foster children, teaching them about Christ, farm life, and encouraging them to be good citizens. Delilah loved to cook and bake and was always making delicious treats for the farmworkers, kids, or family and friends. She was very active in church life, teaching Sunday School, cooking for potlucks, and helping out with the youth groups. Even though she did not ride horses, she was somehow involved in the breaking of every horse. She published the newsletter for the Arrowhead Appaloosa Club, was a member of the Audubon Saddle Club, making trail ride potluck lunches and snacks and always enjoyed helping out the 4-H Club, running their pop stand during County Fair. She loved to play cards and always had friends in for a good game of 10-point pitch or pinnacle. After the kids left the home, Delilah went to work at the Exira Care Center as a charge nurse. She worked there for many years, taking care of friends, family, and neighbors. In 2003, Eldon and Delilah sold the farm and moved to Fairfield, Nebraska to be closer to their daughter, Junelle. They loved to garden and Delilah did a lot of canning and preserving the harvest. Delilah belonged to the Zion Lutheran Church in Shickley, Nebraska. She loved to bake goodies for the fellowship hour and help with making quilts for the Orphan Grain Train. She is survived by her daughters, Junelle (Gunther) Hussmann of Fairfield, Nebraska and Mary Ann Lawrence of Colfax, Iowa; 3 grandchildren, 3 step-grandchildren, many great-grandchildren and numerous nieces, nephews, cousins and friends. Delilah is preceded in death by her husband, Eldon; parents, Wallace and Nellie (Ziegler) Carter; sister, Charlotte Videl and sister, June Osheroff.

The family of Delilah B. Tibben created this Life Tributes page to make it easy to share your memories.

Send flowers to the Tibben family.