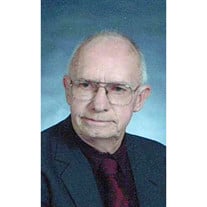 Hastings, NE resident, Delmar Frank Tjarks, 89, passed from this life to the promised resurrection on Friday, November 11, 2016, at CHI Health Nebraska Heart Hospital in Lincoln, NE. Memorial services will be 2:00 p.m., Friday, November 18, 2016, at Immanuel Lutheran Church in Glenvil, NE with Rev. Rob Garton officiating. There will be no visitation as cremation has taken place. Memorial contributions may be directed to Immanuel Lutheran Church in Glenvil, NE or the Alzheimer's Association. Delmar Frank Tjarks was born August 13, 1927, on the family farm south of Glenvil, Nebraska, the son of George J. Tjarks and Dena (Kahman) Tjarks. He was baptized into the Christian faith on August 28, 1927, at Immanuel Lutheran Church in Glenvil. He also affirmed that faith through the Rite of Confirmation at Immanuel on March 29, 1942. He attended elementary school at Willowdale country school south of Glenvil and graduated from Glenvil High in 1945. He was united in marriage with Ila R. Henninger on July 25, 1948 at Immanuel by Pastor Richard Freuhling. Delmar and Ila lived in Kansas City for a short time where he worked as a welder for the Croft Trailer Co. After returning to Glenvil, Delmar managed the Glenvil elevator, and then Muriel elevator south of Hastings for 20 years. In 1968, he became the manager of Fairfield N/S Co-op Fertilizer, where he worked (21 years) until his retirement. Delmar served his community as a member of the Glenvil School Board and as president of the Sandy Creek School Board in its early years. He was also a member of various organizations and boards throughout his life, including the Lion's Club, Glenvil Bank Board, and more. He was a life-long member of Immanuel Lutheran Church, where he served as a Council member, as a member of the Building Committee, and as a Sunday School teacher. Delmar is survived by his wife of 68 years, Ila of Hastings, NE; sons, Steve and wife Karen of York, NE; Randy and wife Sherry of Edgar, NE; Terry and wife Betsy of Hemet, CA; daughter, Jackie and husband Gerry Chapman of Johnson Lake, NE; brothers, Eugene and wife Deloros of Sioux Falls, SD; Myron and wife Mary of Weldona, CO; sisters, Delores Merkel of Hastings, NE; Ilene Gerdes of Glenvil, NE; Francis Schliep of Clay Center, NE; Barbara and Steve Sadd of Geneva, NE; seven grandchildren, eleven great-grandchildren, and numerous nieces and nephews. He was preceded in death by an infant son, Douglas Scott, his parents, his sister, Lorna Brown, and brothers-in-law, Donald Merkel, Frank Gerdes, Donald Henninger, and Duane Schliep.

The family of Delmar Frank Tjarks created this Life Tributes page to make it easy to share your memories.

Send flowers to the Tjarks family.