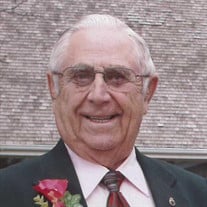 Sutton resident Don A. Huber passed away Saturday, January 29, 2022, at Mary Lanning Healthcare in Hastings, NE at the age of 95 years, 5 months, and 2 days old. Funeral services will be conducted at 10:30 a.m., Saturday, February 5, 2022, at Hope Reformed Church in Sutton, NE with Rev. Scott Henry officiating. A second funeral service will be conducted at 1:30 p.m., Saturday, February 5, 2022, at Sutton Memorial Chapel with the Free German Reformed Salem Church Elders officiating. Interment will follow at the Free German Reformed Salem Church Cemetery near Sutton, NE. Visitation will be Friday, from 1 p.m. – 7 p.m., with the family present from 5 p.m. – 7 p.m., at Sutton Memorial Chapel in Sutton, NE. Visitation will also be Saturday morning prior to the services at the church and Saturday afternoon prior to the services at the funeral home. Memorial contributions may be directed to the Sutton Christian School. Don was born August 27, 1926, to Albert and Margaret (Griess) Huber in Fillmore County, NE. He was baptized, confirmed and a member of the Free German Reformed Salem Church near Sutton, NE. He attended school until the 8th grade. He was drafted into the United States Army in 1950 and served in the Korean Conflict. He returned to the states in 1952, and was discharged in 1956, achieving the rank of Corporal. On August 20, 1953, he was united in marriage to Lucille Griess in Clay Center, NE., and to this union 6 children were born. They farmed near Sutton and then moved into the community of Sutton in 1982. Don and Lucille enjoyed traveling. During his lifetime he had donated gallons of blood to the American Red Cross. He was a Legionnaire for over 60 years. He was a fan and supporter of the Sutton Mustangs and the Nebraska Cornhuskers. Don was also a supporter of the Sutton Christian School. In his later years, he shared the Gospel with many people and spoke often of his Lord and Savior, Jesus Christ. He is survived by his children, Joanne (Dan) Griess; Betty Hofmann; Linda (Lee) Lautenschlager; Joe (Carmen) Huber; daughter-in-law, Cheryl (Eric) Cloet all of Sutton, NE; 12 grandchildren and 27 great-grandchildren. He was preceded in death by his parents; wife, Lucille; sons, James and Gary; granddaughter, Rhonda Hofmann; son-in-law, Dick Griess; brother, Edmund Huber; and 3 sisters, Erna Hensley; Annetta Nuss; and Marie Nuss.

The family of Don A Huber created this Life Tributes page to make it easy to share your memories.

Send flowers to the Huber family.