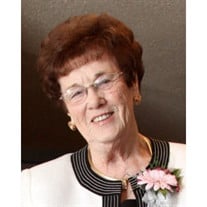 Sutton resident Doreen "Nadine" Margaret (King) Johnson, 86, passed away Tuesday, February 9, 2021, at the Sutton Community Home in Sutton. Funeral services will be conducted at 10:30 a.m., Saturday, February 13, 2021, at the Federated Church in Sutton with Rev. Mary Scott officiating. Graveside services will be conducted at 1:00 p.m., Saturday, February 13, 2021, at the Harvard Cemetery. Visitation will be Friday, from 1 p.m. - 7 p.m., with the family present from 5 p.m. - 7 p.m., at Sutton Memorial Chapel in Sutton. Memorial contributions may be directed to the family to be designated later. Services will be live-streamed from Sutton Memorial Chapel's Facebook page https://www.facebook.com/suttonmemorial. Nadine was born on April 2, 1934, to Arthur and Minnie (Pettifor) King of Leicester, England. Her childhood and school years were spent in Leicester, England. Nadine met Virgil Johnson while he was serving in the U.S. Air Force and they were married on February 21, 1953. They later moved to Virgil's family farm near Harvard, Nebraska where they raised their six children. In addition to raising six children, she also owned and operated The Village Shoppe in both Harvard and Clay Center. Nadine was an active member of the Saronville Methodist Church and Harvard Methodist Church. Virgil and Nadine were very involved in their community as well as being a part of their children and grandchildren's activities. She enjoyed traveling, shopping, playing bridge, and entertaining family and friends. Nadine will always be remembered as a loving and caring mother who always put others first. Survivors include her six children, Timothy (Joan) of Harvard; Rodney (Lisa) of Sutton; Bradley of Harvard; Nicholas (Julie) of Sutton; Kelly (David) Landgren of Hastings; Stacy (John) Connor of Lincoln; nephews, David and Peter Mackey of England; brother and sisters-in-law, Sherol Stone of Sutton and Wanda (Don) Keller of Harvard; 14 grandchildren and 10 great-grandchildren. Nadine was preceded in death by her husband, Virgil; infant son, Douglas; her parents, Arthur and Minnie King; sister, Jo and her husband Tom Mackey; in-laws, Ivan and Ester Johnson and June Johnson; and brother-in-law, Bob Stone.

The family of Doreen (King) Johnson created this Life Tributes page to make it easy to share your memories.