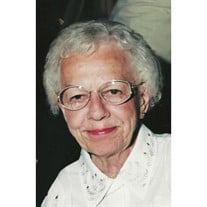 Sutton resident Doris Eileen Salmen, 77, died Saturday, June 16, 2012, at the Sutton Community Home in Sutton, NE. Funeral services will be 1:30 p.m., Thursday, June 21, 2012, at Zion Evangelical Lutheran Church in Sutton, NE with Rev. Judy Nuss officiating. Interment will follow at the Sutton Cemetery. Visitation will be Wednesday, from 1 p.m. - 8 p.m., with the family present from 6:30 p.m. - 8 p.m., at Sutton Memorial Chapel in Sutton, NE. In lieu of flowers, memorial contributions may be directed to the Sutton Community Home or the Alzheimer's Association. She was born October 12, 1934 in Lincoln, Nebraska to Granville and Opal (Douglass) McKeen. Doris attended and graduated from Lincoln High in 1953. She worked for Dr. Paine's dental office in Lincoln. She met the love of her life, Maurice, and they married in Lincoln, Nebraska on September 17, 1955. To this union were born three daughters, Cheryl, Teri and Tamera. She and Maurice lived and farmed by Marquette from 1955 to 1960. In 1960, they moved to the family farm near Lushton where they lived for 40 years. In 2000, she and Maurice retired and moved to their new home in Sutton. During her lifetime, she was involved in daily operations of the farm, gardening, cooking and raising her three children. She was a member of Zion Lutheran Church, sang in the church choir, and was active in the ladies' programs. Survivors include her husband of 57 years Maurice; daughter, Cheryl Olinger and husband Bob of Lincoln; daughter, Teri Salmen of Sutton; granddaughter, Laura Olinger of Lincoln; brother, Charles McKeen and wife Rose Marie of Enfield, CT; sister, Ruby Hauptman and husband Charles of Lincoln; sisters-in-law, Joleen Traudt of Aurora; Arylis Huebert of Henderson; Velma Greenfield and husband Jerry of Lincoln; and Elaine Ekstrand and husband James of Stromsburg; nieces, nephews and an extended family. She was preceded in death by her daughter, Tamera; brother, Kenneth McKeen; infant sister, Darlene; and her parents.

The family of Doris Eileen Salmen created this Life Tributes page to make it easy to share your memories.

Send flowers to the Salmen family.