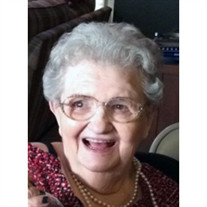 Fairmont, NE resident Dorothy Jean Ballou, 85, passed away Wednesday, December 25, 2019, at Fairview Manor in Fairmont, NE. Funeral services will be conducted at 10:30 a.m., Monday, December 30, 2019, at Sutton Memorial Chapel in Sutton, NE with Vicar Tim Stacy officiating. Interment will follow at the Sutton Cemetery. Visitation will be one hour prior to the service at the funeral chapel. Memorial contributions may be directed to the family to be designated later. Dorothy Jean (Fox) Ballou was born February 25, 1934, to George and Elizabeth (Kohler) Fox in Fillmore County, NE. She received her education at country School attending until the 8th grade. On June 24, 1957, she married Roger Ballou in Hastings, NE. She was employed as a homemaker. Throughout her life, she opened her door to many in need. Friends and family alike were very important to Dorothy. She had many close relationships with nieces and nephews and many friends. She was a member of the American Legion Auxiliary in Cordova and the United Church of Christ in Exeter. She is survived by her daughters, Deana (Ballou) Brust and husband Russel; Debra (Ballou) Hass and husband Douglas; brother and sister-in-law, Dean and Sharon Fox; grandchildren, Lucas, Joshua, Joseph, Frankie, Ronnie and Hannah as well as numerous nieces and nephews. She was preceded in death by her parents, George and Elizabeth Fox; husband, Roger J. Ballou; daughter, Rhonda Jean Ballou; sisters, Anabelle and husband Herb Mason; Esther Genert; and Shirley and husband Red Thomsen

The family of Dorothy Jean Ballou created this Life Tributes page to make it easy to share your memories.

Send flowers to the Ballou family.