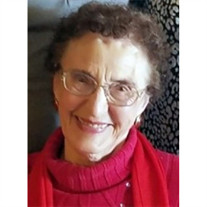 Sutton resident Dorothy Mae Rabbe, 90, passed away Friday, January 11, 2019, at her home in Sutton, NE. Funeral services will be conducted at 10:30 a.m., Tuesday, January 15, 2019, at Zion Evangelical Lutheran Church in Sutton, NE with Vicar Tim Stacy officiating. Interment will follow at the Sutton Cemetery. Visitation will be Monday, from 2 p.m. - 8 p.m., with the family present from 5 p.m. - 7 p.m., at Sutton Memorial Chapel in Sutton, NE. Memorial contributions may be directed to the Stan Rabbe Memorial Scholarship fund or to Zion Evangelical Lutheran Church in Sutton, NE. Dorothy was born February 2, 1928, in Sutton, Nebraska to Edward and Beatrice (Uldrich) Schmidt. She attended District 13 and graduated in 1945 from Sutton High School. Following her graduation, she worked in Washington D.C. as a typist for the FBI. She met Cleo Rabbe while he was stationed there as a Marine. They were wed on March 8, 1946, at the First Presbyterian Church. In 1947, they moved to Sutton to farm her parents' farm and raise their family. Three children were born to this union: Pamela, Stanley and Michael. Besides being an integral part of the farming operation, she worked for the ASCS, served as the Selective Service clerk for Clay County and was employed by George Brothers. Dorothy was a generous and faithful woman who was devoted to her family. She enjoyed gardening, quilting, and playing cards. She always had a "care bag" ready for grandchildren and great grands. Her smile was beautiful, and her love and strength were fueled by her belief in God. She was a member of the Zion Lutheran Church and WELCA, the American Legion Auxiliary and the Sutton Historical Society. Survivors include her daughter, Pamela Stahl and husband Delvin of Sutton; son, Michael Rabbe and wife Lisa of Kansas City; 7 grandchildren, 21 great-grandchildren and 8 great-great-grandchildren. She was preceded in death by her mother, father, husband and son, Stanley.

The family of Dorothy Mae Rabbe created this Life Tributes page to make it easy to share your memories.

Send flowers to the Rabbe family.