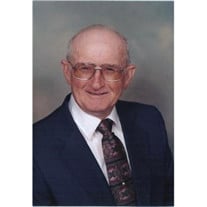 Dr. Larry Dale Barbee from Sutton graduated to glory on Wednesday, February 29, 2012, at the Henderson Hospital in Henderson, NE. Doc was 85 years young. Services honoring him will be 11:00 a.m., Monday, March 5, 2012, at Sutton Memorial Chapel in Sutton, NE with Rev. Martha Nordt officiating. Private family graveside services will be held at the Sutton Cemetery in Sutton, NE. There will be no visitation cremation has taken place. In lieu of flowers memorial contributions may be directed to the Arbor Day Foundation or the Sutton Historical Society. Larry (a.k.a. Doc) Barbee was born on November 22, 1926 in Sutton, Nebraska to Dr. James Sheldon Barbee and Opal Pauline Foster Barbee. Doc graduated from Sutton High School, continued his studies at the University of Missouri, and then completed his formal education at Kansas State University with a doctorate degree in Veterinary Medicine. He returned to Sutton in 1955 and joined the Barbee Veterinary Clinic with his father and his brother Jim.Together the Barbee Veterinary Clinic received recognition for meritorious service to the 4-H. Larry provided large and small animal care for the next 42 years before retiring in 1997. On June 12, 1955 he married his beloved wife Sallie May Matteson and they were blessed with 56 years together in marriage. This beautiful union created 5 children, 15 grandchildren and 17 great grandchildren. Larry was a faithful member of The Way Of Grace Fellowship Church. He also was a member of the Boy Scouts and the ROTC. In High School he was the Nebraska Golden Gloves Boxing Champ. Standing a little over 5' tall he proved it is not the size of the man in the fight but rather the size of the fight in the man. Larry was an assistant leader of the Sutton Rough Riders Saddle Club. He received an award from the FFA as an honorary Chapter Farmer. He was a life member of the American Veterinary Medical Association and Nebraska Veterinary Medical Association, also an active member of both the Nebraska VMA Historical Committee and the Sutton Historical Society. He was also on the committee for the Civil War Memorial Monument located in the City Park in downtown Sutton. The Arbor Day Foundation was one of Larry's favorite places to "shop" purchasing and planting many hundreds of various types of trees on the Barbee Hills Farm. He saw true value in planting and caring for the trees as they grew. Larry's consistent additions to the farm served to add beauty as well as to honor the Nebraska Pioneer Farm Award recognizing the family's ownership for over 100 years. In the same large fashion as planting trees, Doc loved to garden and share his harvest with family and friends. He made remarkably tasty wine and he was well known by all above the age of 21 for sharing generously. His passion for history reached beyond his service to the community with his avid love for reading. Doc loved Western novels especially when they were non-fiction. He would read through books almost as fast as we could supply them, becoming difficult to find new books he had not read. Doc was a man of few words capturing a wonderful sense of humor. People listened whenever he talked because he only spoke when he had something important to say. His memory of details was exceptional; consequently, his storytelling abilities were unmatched often resulting with much laughter. Laughter and joy were familiar friends to Larry. Many years a daily outlet for the happiness was the time he shared with his coffee and crossword puzzle groups. Rarely missing the weekday gatherings, true friendships were shared and enjoyed. Happiness followed Doc in life because he was happy person. If he was at work or coffee or in the hospital or rehabilitation he always managed to find the "funny". The Joy of our Lord resided comfortably in his heart, no doubt providing the great strength he exhibited up to and including his last days here in his earthly body. He was preceded in death by his mother and father Dr. James and Opal Barbee, his infant brother Benne, and his older brother James Barbee. Dr. Larry Barbee is survived by his sister Iris Barnett of Geneva, Nebraska. His wife Sallie of Sutton, Nebraska, and their children: Ben Barbee and wife Candy of Stapleton, Nebraska, Will Barbee and wife Kathleen of Dallas, Texas, Mary Ogren and husband Dick of Grant, Nebraska, April Lemkau and husband Rick of Sutton, Nebraska, Alan Barbee and wife Diane of Ayr, Nebraska, and finally his precious and treasured 15 grandchildren and 17 great grandchildren.

The family of Dr. Dale Barbee created this Life Tributes page to make it easy to share your memories.

Send flowers to the Barbee family.