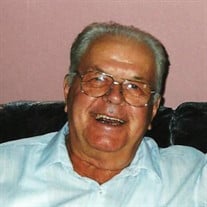 Dwight E. Jaeger , at the age of 87 years , of Hastings, Nebraska also longtime resided of Clay Center passed away Monday, April 2, 2014 at Mary Lanning Health Care Center in Hastings, Nebraska. Funeral services will be held 10:00 a.m., Monday, April 7, 2014 at the United Church Of Christ in Clay Center, Nebraska with Pastor Cathyann Colson officiating. Visitation Sunday from 2 p.m. until 4 p.m. with the family greeting friends at the McLaughlin Funeral Home in Clay Center.Interment is in the Clay Center Cemetery, Clay Center, Nebraska. Memorials in care of the family and to be designated at a later date. Dwight was born to Clayton Clarence and Elsie Emma (Kruse) Jaeger on May 19, 1926, at Imperial, Nebraska. His family including his parents, sister, Verneal, and two brothers, Cleo and Milton lived on the farm. The children rode horses 2 ½ miles to attend country school. Before going to school each day they had to milk 10-12 cows which the family raised. On February 14, 1939, the Clayton Jaeger family moved to a farm site 1 mile north and 1 ½ miles west of Clay Center. Dwight has told the story that as soon as they unhooked the wagons from the long trek from Imperial to Clay County (210 miles) the cows had to be milked. As a child, Dwight contracted Rheumatic fever and was confined to his bed for several weeks. During his period of recovery Dwight had many visitors and made a scrapbook of pictures from magazines and catalogs which represented the people who visited. Although there was a lot of work on the farm there were many happy times too as the family enjoyed music, great food and visiting with neighbors and friends. While living in Clay County the children attended school at East Lynn, a country school. Dwight completed the 8th grade and then went to work on the family farm. He was a self-made man who was accomplished in so many things but always had the desire to complete his education. He reached this goal in 1981 when he earned his GED diploma. Dwight served his country during WWII entering the US Marine Corps January 18, 1945, and received his honorable discharge from active duty on November 30, 1946. Dwight returned to Clay County and to farming. On May 29, 1949, he married Alorice Re'nee Linder. To this union three sons were born, William John, Thomas Lee, and Dennis Paul. The family lived in Clay County for 60 years. Dwight & Alorice raised their sons on a farm site 4 miles north and ½ miles east of Clay Center. One of the highlights of their life at this location was when they moved the large 2-story house from the corner of Highway 41 and 14 to its current location on highway 6. It was quite the sight to see such a large home coming down the highway. Many hours of hard work and loving care went into creating the Jaeger home. Dwight's primary occupation was farming. He was raised on the farm and always had an interest in growing crops and livestock. While the boys lived at home Dwight usually had a few milk cows around to keep them busy. It was pretty evident that after the boys moved out Dwight got rid of the cows. Nearly everyone in the Clay County community knew Dwight and he was a respected leader in the community and his church. He was an active member of the UCC Church in Clay Center including assisting with the Annual Turkey Supper, Hanging of the Greens and member of the Choir. He also sang with a local men's group, 'Minute Men' and was a founding member of the Clay Center Super Senior Center. His involvement included activities such as singing for special events, creating floats for July 4th and Centennial Parades, coordinating coffee meetings, potluck dinners and fundraisers. There were not many people in the county who did not know Dwight or at least knew his hearty laugh and "big' handshake. Another quiet accomplishment of Dwight's was his service to the community through blood donations. In his lifetime, Dwight donated 16 gallons of blood at the various drives that occurred. Other ways Dwight served his community over the years include his law enforcement days. Many people may remember him as the 'town cop' for Clay Center, Sutton and Harvard. In 1986 he ran a successful election campaign for Clay County Sheriff. He served as sheriff from January 1987 - 1990. During his tenure as sheriff he completed training at Law Enforcement Training Center in Grand Island where he had the opportunity to learn new techniques and build lasting friendships with others from neighboring counties and state patrol. Dwight enjoyed farming, square dancing, music and as in his childhood visiting with family, friends and the community. After retiring from farming and law enforcement he kept himself busy with his collection of toy tractors plus full sized antique tractors especially his prized Super H which is now owned by his son, Bill. Additionally, he enjoyed driving the Harvard Rest Haven Shuttle bus and delivering 'shares' to people around the county with his good friend, Bob Mihm. In 2009, Dwight and Alorice moved to Good Samaritan Village where he resided until his death. Dwight was always social. It can be said that "he never met a stranger." Preceded in death by: parents, Clayton & Elsie Jaeger; brothers Cleo & Milton Jaeger and great-grandson, Ezra Workman. Survived by: wife, Alorice of Hastings, NE; sister, Verneal Furst of Dunnellon, FL; sons, William (& Elaine Berry) Jaeger of Clay Center, NE; Thomas (& Vikki) Jaeger of Omaha, NE; Dennis (& Joyce) Jaeger of Loveland, CO as well as many loving grandchildren, nieces, nephews and great grandchildren.

The family of Dwight Erwin Jaeger created this Life Tributes page to make it easy to share your memories.

Send flowers to the Jaeger family.