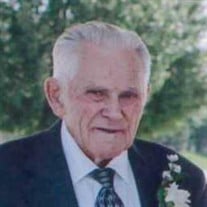 Sutton, NE resident Edmund Huber, 91, passed away Wednesday, November 17, 2021, at the Henderson Health Care Hospital in Henderson, NE. Funeral services will be conducted at 1:30 p.m., Sunday, November 21, 2021, at Sutton Memorial Chapel in Sutton, NE., with the Free German Reformed Salem Church Elders officiating. Interment will follow at the Free German Reformed Salem Church Cemetery near Sutton, NE. Visitation with the family present will be Saturday, from 4 p.m. – 7 p.m., at Sutton Memorial Chapel in Sutton, NE. Memorial contributions may be directed to the family to be designated later. Edmund was born April 2, 1930, in Fillmore County, NE., to Albert and Margareta (Griess) Huber. He was a veteran of the Korean War. His service dates were December 1952 to December 1954. He served honorably in the Army, achieving the rank of Corporal. He was united in marriage to Loretta (Griess) Huber for 62 years on September 7, 1955. To this union were born four children, Mary Lou; Carolyn; Duane; and Marilyn. Edmund and Loretta lived and farmed near Sutton, NE. They moved from the farm into Sutton, NE., in 1985. They loved to travel and take trips to the farm. He is survived by his children, Mary Lou (Brian) Hiebner of Henderson, NE; Carolyn (Robert) Pracheil of York, NE; Duane Huber of Hastings, NE; and Marilyn (Chris) Borchert of Lincoln, NE; one brother, Don Huber of Sutton, NE; eight grandchildren and 14 great-grandchildren. He was preceded in death by his parents; wife, Loretta; three sisters, Erna (Huber) Hensley; Marie (Huber) Nuss; Annetta (Huber) Nuss; daughter-in-law, Karen (Strayer) Huber; and two grandchildren, Kimberly and Kelly Pracheil.

The family of Edmund Huber created this Life Tributes page to make it easy to share your memories.

Send flowers to the Huber family.