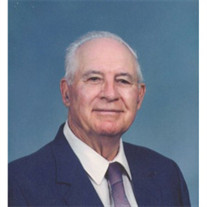 Fairfield resident Elden Arthur Fitzke, 93, died Friday, November 18, 2011, at Rosebrook Care Center in Edgar, NE. Services will be 10:00 a.m., Tuesday, November 22, 2011, at Immanuel Lutheran Church in Glenvil, NE with Rev. Jeff Glawe officiating. Interment will be at the Glenvil Cemetery with Military Honors by American Legion Lewis-Trobough Post #256, Fairfield, NE. Visitation with family present will be from 4-8 p.m., Monday, November 21, 2011, at McLaughlin Funeral Chapel in Clay Center, NE. Memorial contributions may be directed to Immanuel Lutheran Church in Glenvil, NE. McLaughlin Funeral Chapel in Clay Center is in charge of arrangements. Elden was born January 7, 1918, near Glenvil, NE to Arthur & Clara (Wehnes) Fitzke. Elden was baptized 2-24-18 and confirmed May 1933 at Zion Lutheran Church 2 miles West of Clay Center. He is a member and former Councilman of Immanuel Lutheran Church in Glenvil. He attended country school in rural Clay County and graduated from the 8th grade. Elden is a member of the Fairfield American Legion, the VFW, the DAV, & the Eagles where he & Evelyn loved to dance. He is a past member of the Clay County Cattle Feeders Assn and in 1982, was awarded their Long Time Livestock Feeder of the year. His first job, at 16 years of age, was driving 2 mules on a wooden slip and a dump wagon to help build Highway 6 from the Clay Center corner to Sutton. In the fall of 1936, at 18, he went to Fort Dodge Iowa to pick corn and stayed for 2 years as a farm hand. He then enrolled in the Glen Martin Co School in Omaha and was the Foreman of the Steel & Metal dept where they built B26 bombers. Then was transferred to the Baltimore MD aircraft factory for 2 years before being transferred back to Omaha. On August 5th, 1943, his life changed when he was called to the Army to serve his country. Basic was at Fort Riley, and then to the Asiatic Pacific and the Philippines. He was hospitalized for 2 months with yellow jaundice and then sent to Okinawa on the Liberty Ship, where he found some of his friends from Basic training. One of them from Nebraska and two others were later killed. Elden was in Okinawa until the Japanese gave up, and then sent back to the Philippines where he ran a crane for 3 months to load the coffins from small boats to the ship. He spent 3 weeks on the ship to take the bodies to Luzene National Cemetery in San Francisco. He got discharged, a proud Sergeant, and took the train to Hastings NE, arriving on Feb 2, 1946, so he could start his new life as a farmer, raising crops, cattle & hogs. On January 5, 1947, he married Evelyn (Saathoff) Engel at Immanuel Lutheran Church in Glenvil. They lived in Glenvil until August, 1947, when they moved to the farm 2 miles west of Fairfield where Evelyn still resides. On August 31, 1948, their daughter Judith Ann was born and welcomed to the family by Evelyn's two sons, Jim and Steve Engel. In August, 2005, Elden was diagnosed with Alzheimer's and moved to Rosebrook Care Center in Edgar where he died on Nov 18th. Elden loved his family - Step sons Jim (Shari) Engel and Steve (deceased)(Rita) Engel, of Fairfield and his daughter Judith Ann Foote of Casper WY. Grandchildren Jim II (Sue) Engel, Fairfield - Dale (Val) Engel, Hastings - Mike (Tammy) Engel, Chicago - Chris (Jim) Shuck, Edgar - Cathy Engel, Fairfield - Curt Engel, Omaha - Dan (Marilyn) Foote, Casper, WY Great Grandchildren - Katie (Ben) Bramble, Hastings - Zach Engel, Fairfield - Amber (Jimmy) Coffey, Clay Center - Andy Engel, Fairfield - Adam Engel, Hastings - Lexi & Jake Shuck, Edgar - Garrett Engel, Fairfield - Kelsee & Natalee Foote, Casper Great Great Grandchildren Morgan & Jackson Coffey, Clay Center & a host of Nieces and Nephews. Elden is survived by his wife, Evelyn of Fairfield and one sister, Blanche Werner of Beatrice. He was preceded in death by his parents, Step son Steve Engel, brother & spouse Clarence & Dorothy Fitzke, twin sisters and spouse Irene Fitzke and Lorene & Byron Gass and brother in law Ed Werner.

The family of Elden Arthur Fitzke created this Life Tributes page to make it easy to share your memories.

Send flowers to the Fitzke family.