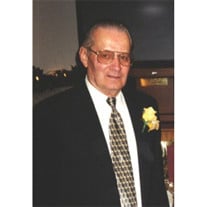 Sutton resident Ephraim Karl Nuss, Jr., 83, died Tuesday, May 13, 2014, at the Sutton Community Home in Sutton, NE. Funeral Services for Ephraim will be held on Saturday, May 17, 2014 at 10:00 a.m. at the Hope Reformed Church in Sutton, Nebraska. Pastor Darrell Kingswood will be officiating the services. Military Graveside services will follow the funeral at the Sutton Cemetery and will be performed by the Sutton American Legion Post #61. Visitation for Ephraim will be held on Friday, May 16 at the Hope Reformed Church from 1:00 p.m. to 6:00 p.m. Memorials are directed to the Hope Reformed Church. Ephraim Karl Nuss, Jr. was born to Ephraim Karl and Rosa (Griess) Nuss on March 14, 1931, near Stockham, NE. He attended country school until the 7th grade and completed the 8th grade at Stockham School. On September 27, 1951, he married Marie Huber and to them 5 daughters were born. On May 9, 1952, he was drafted into the United States Marine Corps. and served until he was honorably discharged on April 15, 1954. Ephraim farmed from 1954 until he retired in 1994. He and Marie lived on a farm near Stockham, NE from 1954-1984, when they moved to Sutton, NE. In 2010, he moved to the Nolde Community Center in Sutton, NE where he resided until moving to the Sutton Community Home in November 2013. He was a member of Hope Reformed Church in Sutton, NE. Ephraim enjoyed doing family history (genealogy), reading spiritual material, attending Bible studies and traveling. He is survived by his daughters and sons-in-law, Diane and Dave Garrelts of Sutton, NE; Delores and Doug Kauk of Harvard, NE; Laura and Mike Grubbs of Grand Island, NE; daughter, Roxanne Nuss of Grand Island, NE; eight grandchildren; and 8 great-grandchildren. He was preceded in death by his wife, Marie Nuss; and daughter, Sharon Nuss.

Sutton resident Ephraim Karl Nuss, Jr., 83, died Tuesday, May 13, 2014, at the Sutton Community Home in Sutton, NE. Funeral Services for Ephraim will be held on Saturday, May 17, 2014 at 10:00 a.m. at the Hope Reformed Church in Sutton, Nebraska.... View Obituary & Service Information

The family of Ephraim K. Nuss, created this Life Tributes page to make it easy to share your memories.

Send flowers to the Nuss, family.