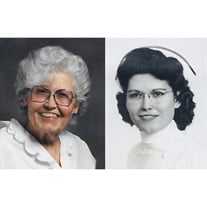 Seattle, WA resident, Evelyn Mae (Plettner) Hardin, 98, passed away Sunday, October 23, 2016, at Highland Adult Family Home in Shoreline, WA. Graveside services will be 11:00 a.m., Wednesday, November 2, 2016, at the Sutton Cemetery in Sutton, NE with Pastor Kevin Whitmore officiating. Visitation will be Tuesday, from 1p.m. until 8 p.m., at Sutton Memorial Chapel in Sutton, NE. Memorial contributions may be directed to Compassion International Medical Fund; 5549 34th Ave. NE, Seattle, WA 98105. Evelyn was born July 3, 1918, in Fayette, Ohio to her parents Eva W. (Stites0 and Elmer W. Plettner Sr. In 1928, Evelyn's parents, along with her siblings moved to Sutton to continue with a hatchery business that had been established a year prior by her father and his brother, John.  Evelyn's childhood and adolescent years were spent attending the Sutton schools where she graduated from high school in 1936.  In September of 1941, Evelyn entered St. Elizabeth School of Nursing in Lincoln, NE and graduated in December of 1944 with her Nursing Diploma. In 1945, she accepted a nursing position at Fitzsimmons Hospital in Denver, Colorado under the Civil Service. She left after 1 year and accepted a supervisory position in a tuberculosis sanitarium in Hilo, Hawaii, which was then a territory for two years. She returned to the states in 1948. In 1949, she accepted a nursing position at the University of California Hospital located in San Francisco, California. It is there that she met and married William B. Hardin in 1954 and moved to Seattle, Washington. In 1955, their daughter, Nora Jane, was born. Her professional years in Seattle were spent at Seattle General Hospital and the University of Washington Medical Center. Evelyn continued to work in the nursing profession until 1981, retiring from nursing after 37 years. Evelyn was an active member of the Daughters of the American Revolution for 70 years.  She was a board member of the University Adult Daycare, the University Food Bank, and attended the University Christian Church in Seattle, Washington where she participated in numerous committees and boards. Evelyn is survived by her daughter, Nora Jane Cashen and her husband Stephen of Coupeville, Washington; her grandson, Andrew Phillip and his wife Angie of Spokane, Washington; her granddaughter, Joivanna Katherine Coburn and husband Mark of Sultan, Washington; her sister, Etta Jean Janzen of Henderson, Nebraska; and numerous nieces and nephews. She was preceded in death by her parents, Eva W. and Elmer W. Plettner Sr.; her brothers, Elmer Plettner Jr and wife Geraldine; Earl Plettner; Elden Plettner and wife Betty; sister, Eva Plettner Bitterman and husband Dick; and brother-in-law Hank Janzen.

The family of Evelyn (Plettner) Hardin created this Life Tributes page to make it easy to share your memories.

Send flowers to the Hardin family.