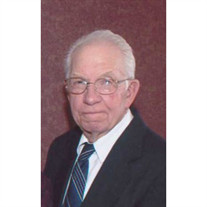 Funeral Services for Fredrick will be held on Wednesday, December 7, 2016 at 2:00 P.M. at St. Mark's Evangelical Lutheran Church in Sutton, Nebraska with Pastor Wayne Oblender officiating. Visitation will be held at Sutton Memorial Chapel on Tuesday, December 6, 2016 from 2:00 P.M. until 8:00 P.M. with the family present from 5:00 P.M. until 7:00 P.M. Military Graveside Services will be conducted from the Sutton Cemetery in Sutton, Nebraska by the American Legion Argonne Post #61. Memorials are to be directed to Sutton EMS or Nebraska Evangelical Lutheran High School. Fred was born the second of twin boys on November 19, 1917 on a farm near Hampton, NE to William and Elizabeth (Siebert) Nunnenkamp. He became a child of God through the washing of Holy Baptism on December 23, 1917. Later his parents moved to a farm south of Aurora where he attended a rural country school. He was confirmed in the Lutheran Christian faith.  Fred served his country in World War II as Sargent in the 400th AAA AW BN Battery C from September 1942 through November 1945. On February 6, 1947, he was united in marriage to Laura Trautman at her parents' home near Grafton, NE. They lived and farmed south of Aurora for five years. They then bought a farm west of Sutton, NE where they raised their family. The Lord blessed this union with four children, one daughter and three sons. In 1985, they built their retirement home just east of the home place. They celebrated their 69th wedding anniversary this year. Fred was a member of First Lutheran in Aurora and after they moved to Sutton became a member of St. Mark's Evangelical Lutheran Church. He was an active member and served in all offices. He also served on the Sutton Co-op board. The Lord called Fred out of this life to life Eternal on December 3, 2016 at the age of 99. He leaves to mourn his passing his wife Laura, son Kenneth and friend Janice Samuelson, son Ardean, wife Linda, daughter Janice, husband David Keim and son Lyle, wife Debra all of Sutton. Eleven grandchildren, Bradley Nunnenkamp, Crystal Friesen, Michele Malousek and Suzanne Martin, Clint, Jason and Anthony Nunnenkamp, Dona Keim, Brett and Dustin Nunnenkamp and Ashley Ray. Twelve great grandchildren, Dawson Nunnenkamp, Adilyn and Jadyn Friesen, Chloe and Breanna Spady, Ivy and Violet Nunnenkamp, Kayla and Kelsey Nunnenkamp, Xavier Lewis and Liam Nunnenkamp, and Briella Keim. Sisters, Bernice Trautman of Seward, NE, and Wilma, husband Dean MacDonald of Riverside, CA., Sister in law, Elizabeth Nunnenkamp of Cosby, MO. Nieces, nephews and many other family and friends. He was preceded in death by his parents, William and Elizabeth, six brothers, John, Harold, Wilber, Eugene, Leroy and George, two sisters, twins Lela Livingston and Letha Mortensen, five sisters in law, two brothers in law and one daughter in law Barb Nunnenkamp.

Funeral Services for Fredrick will be held on Wednesday, December 7, 2016 at 2:00 P.M. at St. Mark's Evangelical Lutheran Church in Sutton, Nebraska with Pastor Wayne Oblender officiating. Visitation will be held at Sutton Memorial Chapel on... View Obituary & Service Information

The family of Fredrick G. Nunnenkamp created this Life Tributes page to make it easy to share your memories.

Funeral Services for Fredrick will be held on Wednesday, December...

Send flowers to the Nunnenkamp family.