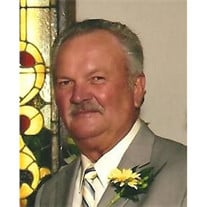 Grafton resident, Gary Jo Oates, 70, passed away suddenly Saturday, February 6, 2016, at the Fillmore County Hospital in Geneva, NE. A celebration of life service will be 11:00 a.m., Thursday, February 11, 2016, at the Federated Church in Sutton, NE with Pastor Michael Fink officiating. Interment will follow at the Grafton Cemetery in Grafton, NE. Visitation will be Wednesday, from 5-8 p.m., at Sutton Memorial Chapel in Sutton, NE. Memorial contributions may be directed to the family to be designated at a later date. Gary was born on August 3, 1945 in Geneva, NE to Orville and Hazel (Elofson) Oates. He was the youngest of 5 children. His childhood was spent on the family farm southeast of Sutton. Gary attended Sutton Public School and graduated in 1963. In 1964, he married Karen Korensky and to this union were born three children: Bill, Julie & Kristy. Gary spent his younger years farming with his dad. The love of farming never left him as he was always helping area farmers through the years. In 1969, Gary moved the family to Lincoln where he ran a mail route between Lincoln and Grafton. They later returned to Grafton where he was the 3rd generation to operate the Oates Standard Service Station. Gary then spent 32 years with Burlington Northern Railroad. On November 30, 1996, he married Marilyn Skibbe. Gary & Marilyn met while taking square dancing lessons and enjoyed many years dancing and camping with the Central RV Camping Club. In his retirement, Gary enjoyed camping, collecting antiques, woodworking and helping his sister Ora with auctions. However, he sometimes brought home more than he auctioned! He loved spending time with his children and grandchildren. It brought great joy to him helping his son Bill on the ranch in Kansas and he never turned down a chance to help his girls and their families on their farms. One special event he always enjoyed was having the whole family over for Christmas and watching them open the gifts he wrapped in Santa's shop in his unique way (duct tape, barbed wire, pet food sacks, etc.) and then initiating the annual paper fight. Gary was an active member of the Sutton Lion's Club, the Central RV Camping Club and the Grafton Volunteer Fire Department. He was preceded in death by his parents Orville and Hazel Oates. Those left to cherish his memory are his wife, Marilyn of Grafton; son, Bill (Joan) Oates of Rosalia, KS; daughters, Julie (Randy) Nunnenkamp of Aurora; and Kristy (Rick) Hiebner of Henderson; step daughters, Lori (Jeff) Harras of Fort Collins, CO; Lisa Schlueter of Windsor, CO; and Amber (Joe) Hand of Windsor CO; siblings, Tom (Dot) Oates of Headland, AL; Mary Ann Riley of Lincoln; Bob (Betty) Oates of Webb, AL; Ora (Dr. Jerry) Adler of Hastings; and sister-in-law, Betty Little of Grafton; 11 grandchildren, 9 step-grandchildren, 7 great-grandchildren, 3 step-great-grandchildren, and numerous nieces, nephews, and friends.

The family of Gary Jo Oates created this Life Tributes page to make it easy to share your memories.

Send flowers to the Oates family.