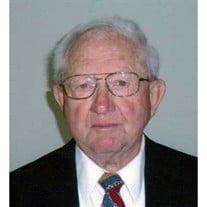 Sutton resident, Gene Bauer, loving husband, father, grandfather, brother, and friend passed away January 5, 2018, at the Sutton Community Home at the age of 90. Funeral services will be held at 10:30 a.m., Wednesday, January 10, 2018, at the Federated Church in Sutton with Rev. Mary Scott officiating. Interment will follow at the Sutton Cemetery. Visitation will be Tuesday, from 1 p.m. - 8 p.m., with the family present from 5 p.m. - 7 p.m., at Sutton Memorial Chapel in Sutton. Memorial contributions may be directed to the family to be designated later. Gene was born in Sutton and was a life-long resident of Sutton, a community he truly loved. He was born on December 24, 1927, to Leslie and Freida (Wahl) Bauer. He received his education in Sutton and graduated from Sutton High School in 1946. He enlisted in the US Army in September 1946 and served in the Far East Occupational Forces in Okinawa, Japan. He was honorably discharged in February 1948. On returning to Sutton he was employed by his father and worked with his brother Roger in the family hardware store, Bauer Hardware. On June 18, 1950, he was united in marriage to Donna Lee Sundberg in Polk, NE. To this union three children were born, Glenn, Leanne, and Gary. In 1951, Gene began his career at the Sutton Post Office as a substitute rural carrier. He rose through the ranks and became Sutton's 15th Postmaster in 1971. Gene retired on January 1, 1988, after 16 ½ years as Postmaster and had a total of 39 ½ years of Civil Service and Military Service. Gene was a member of the Federated Church in Sutton serving on several boards and singing in the choir. He was a member of the Odd Fellow Lodge, the Masonic Lodge, and Sutton American Legion. As a member of Boy Scout Troop 164, he attained the rank of Life Scout where he also was an assistant Scout Master. He was also Cub Master for the Sutton Cub Scout Pack. He served as City Clerk, hunting safety instructor, and 25 years as a Volunteer Fireman. He was a charter member of the Germans From Russia Chapter in Sutton. Gene was one of the organizers of Sutton's Horse Shoe Bend Golf Course and he was very active in fundraising for the Fox Hollow Golf Course. Along with Roger Sheridan, Dr. Larry Barbee, and Beth Bartell, Gene was instrumental in raising funds for the Civil War Memorial statue that stands in the Sutton City Park. He is survived by his wife, Donna of Sutton; children, Glenn and wife Sheila of Omaha, NE; Leanne and husband Howard of Arvada, CO; Gary and wife Jenni of Hastings, NE; grandchildren, Tyler and Emily Alton of Arvada, CO; Crystal, Allie, and Tanner Bauer all of Hastings, NE; brother, Roger Bauer of Lincoln, NE; sister-in-law, Luette Sundberg of Chocktaw, OK; and numerous nieces, nephews, relatives, and friends. Gene was preceded in death by his parents, infant brother John Leslie, infant sister Donna Mae, and brother Gerold.

Sutton resident, Gene Bauer, loving husband, father, grandfather, brother, and friend passed away January 5, 2018, at the Sutton Community Home at the age of 90. Funeral services will be held at 10:30 a.m., Wednesday, January 10, 2018, at the... View Obituary & Service Information

The family of Gene W. Bauer created this Life Tributes page to make it easy to share your memories.

Send flowers to the Bauer family.