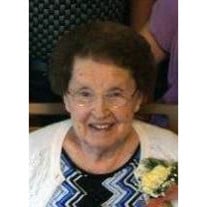 Geneice Mary (Meyer) Ulmer entered into the presence of her Lord and Savior on March 25, 2017 after 95 years and 7 months of life on earth with her family and friends. She was born on August 25, 1921 to Henry and Bertha (Isley) Meyer in Clay County, Nebraska. She was baptized into the Christian church in September 1922 at the Methodist Episcopal Church parsonage in Geneva, Nebraska. Geneice lived most of her entire life in the Geneva/Sutton area. She attended numerous country schools and was a 1939 graduate of Sutton High School. Geneice married Friedhold Ulmer on December 15, 1940 at her parents' home near Sutton, Nebraska. They were married for nearly 65 years until her husband's death in 2005. They lived on a farm southeast of Sutton from the time of their marriage until 1979 when they moved to Sutton. In 2008, Geneice moved to Geneva and regularly participated with fellow seniors at the Geneva Senior Center. Her last 22 months of life were spent in the loving care of the staff at Heritage Crossings. Geneice was a member of the Emmanuel Reformed Church and the ERC Ladies Aid in Sutton as well as the Geneva and Sutton Rebecca Lodges. She enjoyed a life time of gardening, canning, baking and sewing. Each spring for many years she cared for a brood of chicks which later graced the family table; providing meat, eggs, and income for her family. Caring for her husband and family was the priority of her life. She was truly an example of the woman described in Proverbs 31: "she does him good and not evil all the days of her life" and "provides food for her household". Geneice and Friedhold had 3 children: Richard (Beverly) of St. Louis, MO; Marilyn (Ron) Bohling of Lincoln, NE and Eugene (Cindy) of Geneva, NE; 7 grandchildren: David Ulmer, Mairi (Tim) Scharf, Greg (Lynda) Bohling, Angela Bohling, Nathan Ulmer, Chris Ulmer and Cheryl Ulmer; 6 great-grandchildren: Zachary Ulmer, Christian Ulmer, Jireh Scharf, Rachel Bohling, Sarah Bohling, Aidan Ulmer; and 1 great-great grandchild: Brooklyn Ulmer. She was preceded in death by her parents, 3 sisters and 2 brothers. She is survived by 3 sisters and 1 brother in Iowa: Henrietta Huss of Churchville, Marilyn Campbell of Centerville and Dorothy Jean Curtis and Dean Meyer of Des Moines, as well as numerous nieces, nephews, cousins and friends. Funeral services will be held at 10:30 a.m., Friday, March 31, 2017, at Emmanuel Reformed Church in Sutton, NE with Rev. Joe Vusich officiating. Interment will follow at the Sutton Cemetery in Sutton, NE. Visitation will be Thursday, from 1 p.m. until 8 p.m., with the family present from 5 p.m. until 7 p.m., at Sutton Memorial Chapel in Sutton, NE. Memorial contributions may be directed to Emmanuel Reformed Church or the Geneva Senior Center.

Geneice Mary (Meyer) Ulmer entered into the presence of her Lord and Savior on March 25, 2017 after 95 years and 7 months of life on earth with her family and friends. She was born on August 25, 1921 to Henry and Bertha (Isley) Meyer in Clay... View Obituary & Service Information

The family of Geneice M. Ulmer created this Life Tributes page to make it easy to share your memories.

Geneice Mary (Meyer) Ulmer entered into the presence of her Lord...

Send flowers to the Ulmer family.