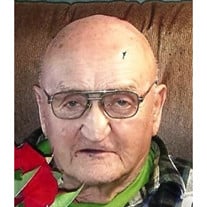 Former Sutton resident, Harlan Glenn Syring, 84, passed away Saturday, November 8, 2014, at The Independence House at Coddington in Lincoln, NE. Funeral services will be 10:00 a.m., Wednesday, November 12, 2014, at Zion Evangelical Lutheran Church in Sutton, NE with Rev. Judy Nuss officiating. Interment will follow at the Sutton Cemetery in Sutton, NE., with military honors by the American Legion Argonne Post #61, Sutton, NE. Visitation will be Tuesday, November 11, 2014, from 3 p.m. - 8 p.m., with the family present from 5 p.m. - 8 p.m., at Sutton Memorial Chapel in Sutton, NE. Memorial contributions may be directed to Zion Evangelical Lutheran Church in Sutton, NE. Harlan Glenn Syring was born May 4, 1930, to George Gottlieb and Helen Louise (Steinbruck) Syring in Hastings, NE. He was raised on a farm and attended country school near Glenvil, NE. On March 1, 1943, the family moved to a farm south of Sutton, NE. Harlan attended Sutton Public Schools and graduated in 1947. After high school, he lived on the family farm and farmed with his father until 1951. In January 1951, he enlisted in the U.S. Navy and served in the Korean War until November 1954. After leaving the Navy he returned to Sutton to establish his career in farming. As he began his farming career, he spent a few winters working in a tire shop in Omaha to earn enough money to continue farming in the spring. On December 2, 1961, Harlan married Karen Merryman. They were blessed with one daughter Glenda. Harlan enjoyed living on the farm while raising crops and cattle. He looked forward to the time he could spend with his family and friends especially his grandsons, Levi and Caleb. In February 2011, Harlan moved to Lincoln, NE and resided in an assisted living facility until his death. Harlan was a member of the American Legion Post #61 and Zion Lutheran Church in Sutton. Survivors include daughter, Glenda and husband Mike Epp of Lincoln, NE; grandsons, Levi and Caleb Epp of Lincoln, NE; sisters, Marilyn and husband Jean Laffitte of Sutton, NE; and Betty Curtis of Martinsburg, WV; as well as nieces, nephews, cousins and friends. Preceding him in death are his parents, George and Helen Syring; brother and sister in law, Don and Shirley Syring and sisters, Leila and Bonnie.

The family of Harlan Glenn Syring created this Life Tributes page to make it easy to share your memories.

Send flowers to the Syring family.