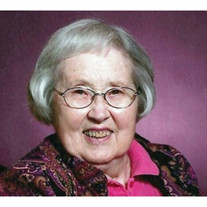 Sutton resident Helen W. Smith, 91, was called home to glory Tuesday, March 6, 2012, at the Sutton Community Home in Sutton, NE. Services are 10:30 a.m., Friday, March 9, 2012, at Hope Reformed Church in Sutton, NE with Rev. Darrell Kingswood Officiating. Interment will follow at the Sutton Cemetery. Visitation will be Thursday, from 1 p.m. - 8 p.m., with the family present from 5 p.m. - 7 p.m., at Sutton Memorial Chapel in Sutton, NE. Memorial contributions may be directed to the Sutton Christian School. Helen Smith was born February 20, 1921, to Henry and Adolphine (Griess) Rath near Grafton, Nebraska. She was united in marriage to Richard A. Smith, Jr. in Sacramento, CA, on June 13, 1943, where he was stationed while serving in the army. Helen's husband served as the postmaster in Grafton, NE for many years. He was called to the arms of the Lord in 1999. They were married for 56 years and had two daughters and a son. In addition to caring for her husband and her children, she worked as a dental assistant and for many years as a cook for the Sutton Public School and at the Sutton Community Home. She was a member of the Hope Reformed Church. She enjoyed sewing, quilting, gardening, puzzles, and of course, cooking. Grateful for having shared in her life are her daughters, Denise Johnsen, Holdrege, NE, Cheryl Boer and her husband, Dave, Sioux Falls, SD; son Steve Smith and his wife Jane, Grafton, NE; ten grandchildren, Angie Bonnema, Abbi Henderson, Brian Boer, Austin Miller, Heather Nienhueser, Liz, Jennifer, Cody, Jonathan and Tim Smith; five great grandchildren, Skyler, Isaac, and Josie Bonnema, Madelyn and Conner Henderson; three sisters, Arlene Hanthorn, Lincoln, NE, Iris Schmahl, Grand Island, NE, Ginny Richards and husband Dale, Geneva, NE; one brother, Tom Rath, Grafton, NE; one sister-in-law, Leona Rath, Sutton, NE; and a host of other relatives and friends. She was preceded in death by her parents, her husband; one sister, Marion Rasmussen; and one brother, Bob Rath.

The family of Helen W. Smith created this Life Tributes page to make it easy to share your memories.

Send flowers to the Smith family.