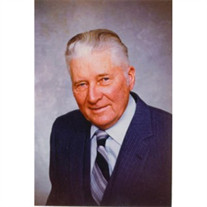 Sutton resident Herman C. Fintel, 96, died Wednesday, December 14, 2011, at Henderson Care Center in Henderson, NE. Services will be 2:00 p.m., Saturday, December 17, 2011, at Zion Evangelical Lutheran Church in Sutton, NE with Rev. Judy Nuss officiating. Interment will be at the Sutton Cemetery. Visitation will be Friday, from 3 p.m. - 8 p.m., and Saturday from 9 a.m. - noon at Sutton Memorial Chapel in Sutton, NE. In lieu of flowers, memorial contributions may be directed to Zion Evangelical Lutheran Church. Sutton Memorial Chapel is in charge of arrangements. Herman was born November 6, 1915, to August and Anna (Lunzmann) Fintel on the family farm near Byron, NE. He was baptized on November 23, 1915, on the family farm near Byron, NE. He was confirmed on June 2, 1929, at Peace Lutheran Church in Deshler, NE. He served his country in WWII from September 25, 1941 until December 20, 1944. He was united in marriage to Velma A. Hespen on February 21, 1954, at Peace Lutheran Church in Deshler, NE., and to this union was born one son. He farmed at Deshler, NE, owned a restaurant in Deshler and had farmed south of Sutton, NE since 1954. He was a member of Zion Evangelical Lutheran Church, where he served on the church counsel for several years and a member of the Deshler and Sutton American Legion. He is survived by his son, Ivan Fintel and wife Cyndee of rural Sutton, NE; one granddaughter, Clarissa (Fintel) Abegglen and husband Luke of St. George, UT; one grandson, Caleb Fintel and wife Jordan of Omaha, NE; two great-grandchildren, Laken and Beckham Abegglen of St. George, UT; two sisters, Matilda Werner of Carlton, NE; Leona Christiansen of Memphis, TN; and numerous nieces and nephews. He was preceded in death by his wife, Velma; his parents; two brothers, Walter and Clarence Fintel and one sister, Marilyn Werner.

The family of Herman C. Fintel created this Life Tributes page to make it easy to share your memories.

Send flowers to the Fintel family.