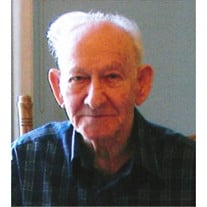 Former Sutton resident Hollis Sumner Barnell, 88, died Sunday, January 15, 2012, at Wedgewood Care Center in Grand Island, NE surrounded by his family. Services will be 10:00 a.m., Saturday, January 21, 2012, at the Federated Church in Sutton, NE with Rev. Eric Biehl officiating. Burial will be in the Sutton Cemetery with military honors by the American Legion Post #61, Sutton, NE. Visitation will be from 1:00-8:00 p.m. on Friday, January 20, 2012, with the family present from 5:00-7:00 p.m. at Sutton Memorial Chapel in Sutton, NE. Memorial contributions may be directed to the family to be designated at a later date. Sutton Memorial Chapel is in charge of arrangements. Mr. Barnell was born on August 26, 1923, in Sutton, NE to George and Anna (Anderson) Barnell. He grew up in Sutton and attended Sutton High School, graduating with the class of 1941. He attended the Colorado Business College. He enlisted in the U.S. Army in 1943. On May 7, 1944, he married Norma (Rothfuss) in Junction City, KS. Hollis was stationed in Fort Riley, KS until his discharge in 1946. He began his career in Hastings with the U.S. Postal Service and in 1964, moved to Sutton where he was a rural mail carrier retiring after thirty nine years of service. He was a lifelong member of the Sutton Federated Church. He was a member of the American Legion Post #61 for over sixty years and held various county and state offices. He played "Reveille" in the Army and played taps on his trumpet at Memorial Services and funerals for over fifty years. Hollis and Norma were very active volunteers for the Grand Island Veterans Home and Veterans Administration Medical Center. He enjoyed being Santa's helper for many Veterans Christmas activities. He was a member of the Sutton Volunteer Fire Department for over forty years and the Sutton Masonic Lodge for over sixty. Hollis enjoyed collecting stamps and coins. He was an avid fisherman and hunter. He enjoyed working in his yard and garden. Hollis and Norma enjoyed traveling, playing bingo, board games and spending time with family. Those left to cherish his memory include one daughter and son-in-law, Connie (Barnell) and Randy Ross of Grand Island, NE; grandchildren, Jason Smith of Lincoln, NE; Michelle Valenta of Aurora, NE; Tori Ross of Omaha, NE; great-grandchildren, Zachary, Justin, and T.J. Valenta of Aurora, NE; Braelyn and Kelton Smith of Lincoln, NE; brothers, Gilbert Barnell and wife Shirley, of Aurora, NE; Dean Barnell and wife Donna, of Lincoln, NE; brother-in-law, Mike Rothfuss and wife Marge of Hastings, NE; sister-in-law, Darlene Engelhardt of Iowa; and numerous nieces, nephews and cousins. He was preceded in death by his parents; wife of sixty five years, Norma; and daughter, Pamela Cool.

The family of Hollis Sumner Barnell created this Life Tributes page to make it easy to share your memories.

Send flowers to the Barnell family.