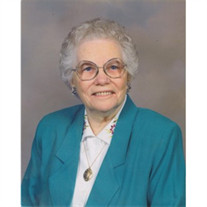 Sutton resident Irene Fern Reutzel-Heinz, 95, passed away peacefully early morning November 12, 2011, surrounded by her family at the Sutton Community Home in Sutton, NE. Services will be 2:00 p.m., Monday, November 14, 2011, at Sutton Memorial Chapel with Rev. Martha Nordt officiating. Interment will be in the Sutton Cemetery in Sutton, NE. Visitation will be Sunday, November 13, 2011, from 2p.m. until 8p.m., and Monday, from 9a.m. until service time at Sutton Memorial Chapel in Sutton, NE. Memorial contributions may be directed to the Sutton Community Home. Irene was born September 12, 1916, in Stratton Nebraska to Jessee and Sophia (Miller) Witherbee as the eldest of 5 siblings. Irene married Roy Reutzel June 28, 1936. Roy and Irene raised three sons, Robert, Glenn, and Ronald in Sutton Nebraska. Irene was a well-known cook and was employed by Ted's Highway Café until 1964, when she went to work at the Sutton Community Home from where she retired after 21 years. Irene was a devout Christian and was a member of the Salem United Methodist Church. Irene worked as a church secretary and taught Sunday school for many years. She played both the organ and the piano for church services and at the Sutton Community Home. Irene lost her husband Roy in 1980. Irene again found love and married Herman Heinz in 1987. Irene is survived by her sons: Robert (Evelyn) Reutzel of Sutton, NE; Glenn (Peg) Reutzel of Firth, NE; and Ronald Reutzel of Sutton, NE; eight grandchildren, sixteen great grand children, and six great-great grand children. Irene was preceded in death by her parents, first husband Roy,second husband Herman, her brother John Witherbee and sister Doris Todd.

The family of Irene Fern Reutzel-Heinz created this Life Tributes page to make it easy to share your memories.

Send flowers to the Reutzel-Heinz family.