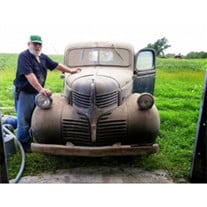 Clay Center resident, James E. (Jim) Kiolbasa, 65, passed away due to health problems on Saturday, August 22, 2015, at Mary Lanning Healthcare in Hastings, NE. Funeral services will be 10:30 a.m., Wednesday, August 26, 2015, at the United Church of Christ in Clay Center, NE with Rev. Harry Cross officiating. Interment will follow at the Clay Center Cemetery with military honors by the American Legion Mills-Schroder Post #87, Clay Center, NE. Visitation will be Tuesday from 1 - 8 p.m., with the family present from 5 - 7 p.m., at McLaughlin Funeral Chapel in Clay Center, NE. Memorial contributions may be directed to the family. James E. (Jim) Kiolbasa was born to Emil and Sally (Sabata) Kiolbasa on June 8, 1950 in North Platte, NE. Jim grew up in Grant, NE and attended District #50 Country School, graduated from Perkins County High School in 1968. Jim worked at Emmett's repair, Grant Theater, and on the Family Farm until December 1969 when he joined the US Air Force. Jim served at Lowery Air Force base in Denver Colorado, Davis Mothan Air Force Base in Tuscan Arizona and 7236 Amano Supply Squadron at Hahn Air Force Base in Germany and was discharged in December 1973. In 1974, he attended tech school for heavy equipment in Florida then returned to Grant and went to work for Wendell's Irrigation until November 1978 when he moved to the Clay Center area and worked several jobs. In 1981, he was united in Marriage to Carol Lobb of Clay Center and to this union two children were born. In 1984, Jim started farming with Harvey & Pearl Lobb of Clay Center. In 1997, he went to work for Wal-Mart stores and in 2003, started to work for Clay County Courthouse, he retired in 2010 due to health. He loved to do projects for his family and enjoyed spending time collecting and organizing treasures for his shop. He was a jack of all trades and a loving husband and father. He was a member of the Hastings DAV and American Legion in Clay Center. He also served in the rural fire board and Lone Tree Township. He is survived by his wife, Carol of Clay Center, NE; son, Michael Kiolbasa and wife Carmen of Lincoln, NE; daughter, Barbie and Husband Jesse Barto of Hastings, NE; mother, Sally Kiolbasa of Grant, NE; sister, Nancy Sapp of Harvard, NE; brother, Bob and wife Brenda of Grant, NE; nieces and great nephews, and a host of friends. Preceding him in death was his father, Emil; sister, Sandy and his grandparents and in-laws.

The family of James (Jim) Kiolbasa created this Life Tributes page to make it easy to share your memories.

Send flowers to the Kiolbasa family.