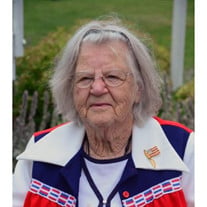 Clay Center resident Jane Marie Taylor, 99, passed away Monday, April 30, 2018, at the Harvard Rest Haven in Harvard, NE. Funeral services will be conducted at 10:30 a.m., Friday, May 4, 2018, at the United Church of Christ in Clay Center with Rev. Kathryn Bates officiating. Interment will follow at the Clay Center Cemetery. Visitation will be Thursday, from 1 p.m. - 8 p.m., with the family present from 5 p.m. - 8 p.m., at McLaughlin Funeral Chapel in Clay Center, NE. Memorial contributions may be directed to the family to be designated later. Jane was the second child born to William E. and Constante H. (McCune) Herdon on August 17, 1918, at Baker City, OR. At the age of 3, they moved to Toledo, WA and a year later to Saline County, NE where her father took over the Herndon family farm. This is where she grew up. She went to the Spunky Hollow and Busy Bee Rural Schools and high school at Western, NE where she studied Normal Training to be a teacher. Jane confessed her faith and was baptized into the Western Baptist Church in August 1927. Upon graduating from high school in 1936, she moved to Hebron, NE where she helped an aunt nurse an invalid daughter-in-law back to health. That fall her parents left the farm and moved to Hebron. She spent a year at Sheridan, WY and returned to Hebron where she taught a rural school in Thayer County for one year. On May 28, 1942, she married Crittenden J. Taylor of Clay Center, NE. Two sons were born to them, William J. and John C. Clay Center has been her home ever since then, first on rented farms and then on the Stephenson/Taylor farm where they received the Aksarben Pioneer Award in 1986. Crit died in 1990, and she remained on the farm until May 1996, when she bought her present home in Clay Center. Always interested in social history she became involved with genealogy and made a hobby of doing research for folk with Clay County roots. Over the years Jane has belonged to the Prairie Valley, Bethel and Rolling Pin Women's Extension Clubs, the Nebraska State Historical Society, Nebraska State Genealogical Society and the Adams County Historical Society. She was a member of the Clay Center United Church of Christ, the Women's Society and Bible Study Group, the Niobrara/Butler/Johnson DAR, Clay County Historical Society and Clay Center Super Seniors. She is survived by her sons, William J. (Carol) Taylor of McKinney, TX; John C. Taylor of Clay Center, NE; grandson, Monte (Robin) Taylor of Corpus Christi, TX; great-grandson, Ryan Taylor of Corpus Christi, TX; step-granddaughter, Laura (Steve) Brown of Pekin, IL; step-grandson, Ryan (Jenn) Halze of Celina, TX; five great-grandchildren; six great-great-grandchildren; five siblings, Cora Bea Whitten of Omaha, NE; Charles Herndon of Crete, NE; Rueben D. (Sue) Herndon of Toledo, WA; Robert M. (Nancy) Herndon of Fort Wayne, IN; Joan (Glen) Tippery of Deatur, NE; numerous nieces, nephews, other relatives and a host of friends. She was preceded in death by her parents; sisters, Virginia Magner; Ruth Merriam; Esther Lou Burklund; Anna Loyd and Alberta Stauber.

Clay Center resident Jane Marie Taylor, 99, passed away Monday, April 30, 2018, at the Harvard Rest Haven in Harvard, NE. Funeral services will be conducted at 10:30 a.m., Friday, May 4, 2018, at the United Church of Christ in Clay Center with... View Obituary & Service Information

The family of Jane Marie Taylor created this Life Tributes page to make it easy to share your memories.

Send flowers to the Taylor family.