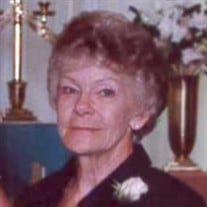 Hastings resident Janet C. Buerer, 81, passed away Friday, February 11, 2022, at Mary Lanning Healthcare in Hastings, NE. A Rosary will be prayed at 7:00 p.m., Thursday, February 17, 2022, at St. Cecilia Catholic Church in Hastings, NE. Mass of Christian Burial will be conducted at 10:00 a.m., Friday, February 18, 2022, at St. Cecilia Catholic Church in Hastings, NE., with Father Christopher Kubat and Father Thomas Brouillette officiating. Interment will follow at the Clay Center Cemetery. Visitation will be Thursday, from noon until 4:00 p.m., at McLaughlin Funeral Chapel in Clay Center, NE. Memorial contributions may be directed to the family to be designated later. Services will be live-streamed through McLaughlin Funeral Chapel’s Facebook page https://www.facebook.com/claycenterchapel Janet C. Buerer was born January 7, 1941, in Boone County, NE, to William, Sr. and Evelyn (Wemhoff) Veik. She received most of her education in Boone County, NE, before moving to Denver, CO. She married Bernard Joseph Temme on June 14, 1958, in Petersburg, NE. Together they had three children, Timothy (Tim), Victoria (Vicky) and Michelle (Shelly). She later married Dennis Buerer on December 1, 1973, in Clay Center, NE. She was employed with the Adams County Clerk of the District Court and retired in March of 2019. She attended church at St. Cecilia Catholic Church in Hastings, NE. She spent most of her life living between Nebraska and Colorado. In her free time, she enjoyed traveling with her family to see other family and friends. Jan loved to sing and dance and was very talented musically. She played and coached softball and enjoyed bowling. She attended many sporting events and activities of her children and grandchildren. One of her favorite pastimes was working in her yard and gardening. Janet was a cancer survivor, and battled cancer off and on for 7 years. She spent her final days at home surrounded by her children and loved ones. She will be greatly missed. She is survived by her three children, Timothy Temme of Lincoln NE; Victoria (Tim) Stine of Parker, CO; and Michelle (Gary) Ernst of Ayr, NE; grandchildren, Michael (Dawn) Temme; Megan (Caleb) Howe; Sara (Ardell) Hisey; Alexandria Temme; Nathan (Marianna) Temme; Miranda Temme; Benjamin (Ashley) Stine; Brett (Breanna) Stine; Beau Stine; Tarah (Ben) Greenfield; Bradley (Jen) Ernst; Kaitlyn (Tony) Vossler and Trevor Ernst; 16 great-grandchildren, 1 great-great-grandchild (born on her 80th birthday); Two of her ten siblings, Keith (Sandy) Veik and Stephen (Sue) Veik; sisters-in-law, Bonnie; Jimmie; and Kayoko; and a host of beloved nieces and nephews as well as extended family members. She was very proud of her family and loved them all the same. She was preceded in death by her parents, her spouses, and siblings, Alvin (Pat) Veik; Gerald Veik; Donna (Frank) Paproski; Marie (Robert) Smith; William, Jr. (Ardie) Veik; Ronald (Mickie) Veik; Linus Veik; and Terrance Veik.

The family of Janet C. Buerer created this Life Tributes page to make it easy to share your memories.

Send flowers to the Buerer family.