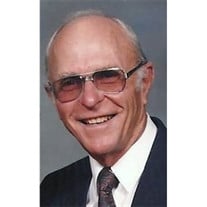 Sutton resident Kenneth Don Kauk, 87, went to be with the Lord on Wednesday, March 20, 2013, at Memorial Hospital in Aurora, NE. Services will be 2:00 p.m., Saturday, March 23, 2013, at Hope Reformed Church in Sutton, NE with Rev. Darrell Kingswood officiating. Interment will follow at the Sutton Cemetery in Sutton, NE. Visitation will be Friday, from 3 p.m. - 8 p.m., with the family present from 5 p.m. - 7 p.m., at Sutton Memorial Chapel in Sutton, NE. Memorial contributions may be directed to the family to be designated at a later date. Kenneth was born on August 4, 1925, in rural Clay County to Reinhold P. and Verna C. (Ochsner) Kauk. He began his education near his home at the District 29 one-room schoolhouse and later attended and graduated from Sutton High School. On December 5, 1948, Kenneth married Eileen Byrkit at Clay Center, Nebraska. He spent his working years farming with his father and later with his son Dave. Kenneth was a life-long member and elder of Hope Reformed Church. He had a passion for his Lord and the church, his family, teaching young people, music, writing, and farming. He will be remembered for the many ways he shared his love for music with others - singing for events, directing the church choir, and filling his day with song. He served as a 4-H leader and on the boards of the Eldorado Co-op and the Sutton Community Home. Kenneth is survived by his wife Eileen; sons David (Ann) of Saronville, NE, and Mark of Orange City, IA; daughter Nancy (Dave) Klauschie of Omaha; grandchildren Emily (Nick) Mouw, Nathan (Blaire) Kauk, Sarah Kauk, Nathan Poel, Daniel (Randa) Poel, David (Briana) Poel, Trevor Kauk, Dallas Klauschie and fiancé Joe Durick, and Lyndon Klauschie; great-grandchildren Austin and Chase Mouw, and Brynnleigh Kauk; and sister-in-law Lenora (Raymond) Kauk. He was preceded in death by his parents and step-mother Clara (Ehly-Kauk) Rauscher, brothers Raymond and Paul, granddaughter Joanna Kauk, and daughter-in-law JoEllen Kauk.

The family of Kenneth D. Kauk created this Life Tributes page to make it easy to share your memories.

Sutton resident Kenneth Don Kauk, 87, went to be with the Lord...

Send flowers to the Kauk family.