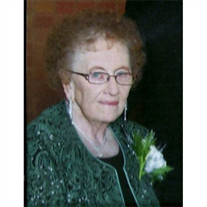 Lorene "Screeno" Esther (Griess) Johnson entered into rest on June 27, 2015, at the Sutton Community Home in Sutton, NE at the age of 91. Funeral services will be 10:00 a.m., Wednesday, July 1, 2015, at the Federated Church in Sutton, NE with Rev. Mary Scott officiating. Interment will follow at the Sutton Cemetery in Sutton, NE. Visitation will be Tuesday, June 30, 2015, from 1 - 8 p.m., at Sutton Memorial Chapel in Sutton, NE. Memorial contributions may be made in care of the family. She was born on a farm north of Sutton to Alfred and Frieda (Engelhardt) Griess on October 23, 1923. She attended Sutton High School and graduated in 1940. After high school she attended Normal Teacher Training in Kearney, and taught in several area one-room schools. During World War II she worked at the Navy Ammunition Depot near Hastings, NE as an office clerk. After the War she met and married Rolland Johnson from Harvard, a veteran and farmer. They were married on March 15, 1950 in Saronville during a blizzard. They were blessed with three daughters, Deborah, Janis and Becky. Rolland preceded her in death on December 11, 1998. Lorene was a dedicated homemaker and had many talents. She loved to paint, knit, and practice various other needlecrafts. She also started a cake baking and decorating business from her home and provided cakes for many friends' and relatives' weddings, graduations, and special occasions. She also loved gardening and flowers and at the age of 57 opened a floral shop in Sutton with her daughter Deb called Plant Potpourri. They owned the floral shop until 1990. She was an active member of the Saronville Methodist Women's Fellowship and later the Sutton Federated Church Women's Circle. She was a 4-H club leader for many years, a member the Better Homes and Gardens Extension Club, and the Sutton American Legion Auxiliary. She was preceded in death by her parents, 2 brothers and 2 sisters and her husband Rolland. Survivors include daughters Deb and husband Bob Unterseher of Sutton, Jan and husband John McKenzie of Sutton, and Becky and husband Chip Cary of Goodyear, AZ. In addition, she is survived by four grandsons: Andy and wife Becky Unterseher of Lincoln, Nolan Unterseher of Sutton, Brady Unterseher of Sutton, Nathan and wife Jan Jaree McKenzie of Sutton, and one step-granddaughter Jenny and husband Casey Diers of River Forest, Ill; 6 great-grandchildren: Isaiah and Claire Unterseher, Mason McKenzie and Jentry Stenger, Adelynn Unterseher and Fiona Diers. She also was an "adopted" OMAH (grandma) to Steffie Bosman from Breda in the Netherlands, an exchange student who stayed with the McKenzie's in 2001-2002, who said she was "a true grandma for me while staying in Sutton." Her sister Helen Nuss of Minnesota and brother Jerry and wife Rosalie Griess of Indiana also survive her, and many other relatives and friends.

Lorene "Screeno" Esther (Griess) Johnson entered into rest on June 27, 2015, at the Sutton Community Home in Sutton, NE at the age of 91. Funeral services will be 10:00 a.m., Wednesday, July 1, 2015, at the Federated Church in Sutton, NE with... View Obituary & Service Information

The family of Lorene Esther Johnson created this Life Tributes page to make it easy to share your memories.