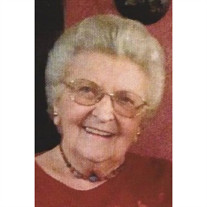 Sutton resident, Louise Hofmann, 96, passed away Friday, July 8, 2016, at the Sutton Community Home in Sutton, NE. Funeral services will be 10:00 a.m., Monday, July 11, 2016, at Sutton Memorial Chapel with the Free German Reformed Salem Church Elders officiating. Interment will follow at the Free German Reformed Salem Church Cemetery. Visitation will be Sunday, from 2 p.m. - 8 p.m., at Sutton Memorial Chapel. In lieu of flowers memorial contributions may be directed to the Sutton Community Home. She was born on November 19, 1919, near Sutton in Clay County to Heinrich Martin and Emma (Hofmann) Griess. She lived on the farm and attended country school through the 8th grade. On October 9, 1941, she was united in marriage to Arthur Hofmann for 65 years.  She was a member of the Free German Reformed Salem Church her entire life. Her greatest love was flowers, music and art work. She also was her husband's assistant with farm work her entire life until their retirement in 1963. She is survived by her four daughters, Elizabeth Carlson; Luella (Don C.) Griess; Esther (Don R.) Griess and Leota (Ron) Griess all of Sutton; sister-in-law, Minnie Hofmann of Sutton; eight grandchildren; twelve great-grandchildren; and nieces and nephews. She was preceded in death by her husband, her parents, three sisters, eight brothers-in- law, four sisters-in- law, a son-in-law, two grandsons and one nephew.

The family of Louise Hofmann created this Life Tributes page to make it easy to share your memories.

Send flowers to the Hofmann family.