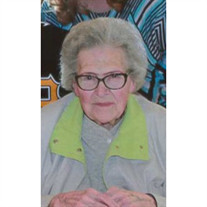 Fairfield resident, Lucille M Jorgensen, 91, passed away Friday March 31, 2017 at the Harvard Rest Haven in Harvard Nebraska. Lucille was born in Fairfield, Nebraska on December 16, 1925 to John and Josie (Slama) Blaha. She graduated from high school in Fairfield, and obtained college scholarships as valedictorian of her class. She married A.K. "Tub" Jorgensen on January 17, 1959. Lucille held various jobs in Lincoln and Omaha Nebraska and loved to walk wherever she had to go. She retired from the Nebraska Department of Economic Development in 1992 and moved back to Fairfield. She enjoyed going to Borger Texas to visit her sister Dorothy and some very special friends there. Lucille loved visiting with friends and their children in Fairfield, and would attend many of their sporting activities at Sandy Creek High School. Lucille and her sister Dorothy marked their place at Ken & Al's in Fairfield for years, and the locals would listen to their wonderful stories, which were many. Lucille loved to work crossword puzzles, play solitaire, and would buy a lottery ticket....or three, to bide her time. She was preceded in death by her parents, husband "Tub", and brother-in-law, Stanley Bissantz. She is survived by her sister, Dorothy of Fairfield and numerous friends. A funeral service for Lucille was held on Wednesday, April 5, 2017 at 10:30 a.m. at the McLaughlin Funeral Chapel in Clay Center. Pastor Bill Harrold officiated the service. Dennis Washburn accompanied the congregation in the singing of "In The Garden" and "Because He Lives." Pallbearers for the service included Marlyn Fike, Dennis Fike, Todd Schiermeyer, Ed Kimminau, Russ Prochaska, and Gary Stratton. Interment was held in Fairfield Cemetery. Memorials are suggested to the Fairfield Fire & Rescue. McLaughlin Funeral Chapel conducted the services. Online condolences can be left at www.mclaughlinchapel.com

The family of Lucille M. Jorgensen created this Life Tributes page to make it easy to share your memories.

Send flowers to the Jorgensen family.