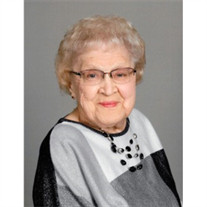 Sutton resident Lucille K. (Carlson) Robley, 97, passed away Monday, April 1, 2019, at the Sutton Community Home in Sutton, NE. Funeral services will be conducted at 2:00 p.m., Saturday, April 6, 2019, at Hope Reformed Church in Sutton, NE with Rev. Scott Henry officiating. Interment will follow at the Sutton Cemetery. Visitation will be Friday, from 1 p.m. - 8 p.m., with the family greeting friends from 5 p.m. - 7 p.m., at Sutton Memorial Chapel in Sutton, NE. Memorial Contributions may be directed to Hope Reformed Church in Sutton, NE. Lucille was born January 17, 1922, to Adam D. and Henrietta F. (Griess) Bauer in Arriba, CO. They later moved to a farm by Lushton where she and her siblings were raised. She went to country school, then to Sutton High School and graduated with the class of 1940. She married Everett Carlson on April 8, 1944, in Lincoln, NE. They lived in Lincoln and Omaha where they were both employed at the Glenn L. Martin Bomber Plant. She was a "Rosie the Riveter" and helped assemble the B-29 Superfortress planes. They later bought a farm southwest of Sutton where their three children were raised. She started working at the Sutton Community Home in Sutton when it first opened in 1964 and worked until she retired in 1995. Everett passed away from injuries sustained in a car accident on icy roads on November 22, 1978. She married Duayne W. Robley on October 27, 1981. She lived in her home till shortly before her death. Lucille loved the Lord, her children, her grandchildren, and her great-grandchildren--the latest being born just one week before she passed away. She was also expecting another great-grandchild in July, and her first great-great-grandchild in May. She also had a love for all animals. She leaves to mourn her passing her husband, Duayne at the Vet's Home in Kearney, NE; son, Dennis (Charlotte) Carlson of Hastings; daughters, Connie (Rollie) Johnson and JoAnn (Mark) Brown both of Sutton; 7 grandchildren; 20 great-grandchildren; and a host of nieces, nephews and friends. She was preceded in death by her husband, Everett; her parents, Adam and Henrietta; her brother, Harold; and her sisters, Shirley White and Eleanor Heinbigner. "We are confident, I say, and willing rather to be absent from the body, and to be present with the Lord" II Corinthians 5:8.

The family of Lucille (Carlson) Robley created this Life Tributes page to make it easy to share your memories.

Send flowers to the Robley family.