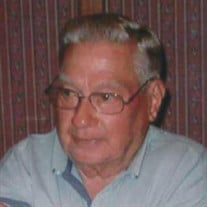 Sutton, NE resident Lyman Louis Brown, 91, passed away peacefully Thursday, April 8, 2021, at Legacy Square in Henderson, NE., with family by his side. Funeral services will be conducted at 9:00 a.m., Tuesday, April 13, 2021, at Sutton Memorial Chapel with Pastor Mary Scott officiating. Private family interment with military rites will follow at Fort McPherson National Cemetery in Maxwell, NE. Visitation with the family present will be Monday, from 4:00 p.m. – 7:00 p.m., at Sutton Memorial Chapel in Sutton, NE. Memorial contributions may be directed to the family to be designated later. Lyman was born August 20, 1929, in Elgin NE to David and Grace (Arehart) Brown. He graduated from Oakdale Public School in 1945. After graduation, he worked as a lineman, until he enlisted in the United States Army in August 1951. He proudly served his country during the Korean War from March 1952 to February 1953 where he received a Bronze Star Medal for heroic achievement. He was united in marriage to Barbara Berry on September 18, 1953. Lyman and Barbara raised three children in the Scribner, NE., area. He was an electrical lineman at NPPD for 33 years, retiring in 1991. He married Elgene Hunke in 1990. They enjoyed traveling, attending country music festivals, and spending time with their grandchildren. Lyman was an avid gardener and enjoyed the outdoors. He was preceded in death by his parents, David and Grace; wife, Barbara; and sister, Martha Nelson. He is survived by his wife, Elgene; daughters, Teresa Wagner and Mary Ann Wietfeld both of Fremont, NE; son, Alan (Cheryl) Brown of Sutton, NE; siblings, Dean Brown; Clifford Brown; Ardella Overton and Rosella Voborny; grandchildren, Amanda (James) Colson; Travis (Liz) Benne; Jennifer (Nate) Brown; Ashley (Nathan) Werner; Peter Wagner; Andrew (Emily) Sheridan; and Tristan (Delaney) Sheridan; 7 great-grandchildren and numerous nieces and nephews.

The family of Lyman Louis Brown created this Life Tributes page to make it easy to share your memories.

Send flowers to the Brown family.