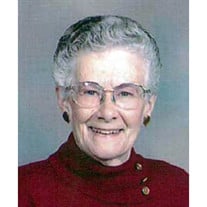 Former Clay Center, NE resident, Marcella Ann Kangas, 88, passed away Tuesday, May 2, 2017, at Bryan Medical Center East Campus in Lincoln, NE. Graveside services will be held at 10:00 a.m., Monday, May 8, 2017, at the Clay Center Cemetery with Pastor Bill Harrold officiating. Honoring her wish to be cremated, there will be no viewing or visitation. Memorial contributions may be directed to the family to be designated later. Marcella Ann Kangas was born November 7, 1928, to Bruce and Fearn (Adams) Young in Hastings, NE. She received her education in Nelson and Edgar. On April 2, 1947, she married Gene Thomas in Mankato, KS. She was employed with MARC as a Sensory Panelist and later at the Clay Center School as a custodian. Gene passed away in February of 1960, and Marcella moved to Clay Center with their 5 children, Teresa, Daniel, Richard, Sharon and Bryan. On May 20, 1972, she married Duane Kangas in Clay Center, NE., where they made their home until September 2012, when they moved to Hastings, NE. She was a member of the Clay Center Christian Church and the American Legion Auxiliary. She is survived by her daughters, Teresa Neel and Sharon Ager; sons and daughters-in-law, Daniel and Shelley Thomas; Richard and Fely Thomas; Bryan and Charlotte Thomas; 11 grandchildren and 7 great-grandchildren. She was preceded in death by her husbands, Gene Thomas and Duane Kangas; her parents; 2 grandsons and a brother, Russell Young.

The family of Marcella Ann Kangas created this Life Tributes page to make it easy to share your memories.

Send flowers to the Kangas family.