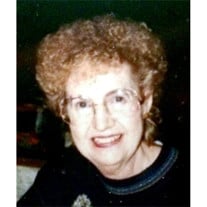 Former Sutton resident, Mildred D. Griess, 89, passed away Tuesday, July 28, 2015, at the Veterans' Home in Grand Island, NE. Funeral services will be 1:00 p.m., Saturday, August 1, 2015, at Emmanuel Reformed Church in Sutton, NE with Rev. Joe Vusich officiating. Interment will follow at the Sutton Cemetery. Visitation will be Friday from 1 - 8 p.m., with the family present from 3 - 5 p.m., at Sutton Memorial Chapel in Sutton, NE. Memorial contributions may be directed to the family. Mildred was born January 14, 1926, in Marquette, NE to John and Carrie (Sanderson) Lindblom. She received her education in Hordville, Ne and graduated from Hordville High School in 1944. Following high school she moved to Grand Island, NE and was employed at a bakery. In 1952, she contracted both types of polio and was able to survive them both. After recovering from polio she began working at a pharmacy and in November of 1954, she met Jonathan Griess. On May 11, 1955, she married Jonathan Griess and to this union a daughter Gina was born. In 1955, they made their home on a farm east of Sutton where they resided until 2011, when they moved to the Veterans' Home in Grand Island, NE. She was a member of Emmanuel Reformed Church in Sutton, NE. She enjoyed writing poetry and loved singing and playing her steel guitar. She loved her family especially her grandchildren and great-grandchildren. She is survived by her husband, Jonathan Griess of Grand Island, NE; daughter and son-in-law, Gina and Steve Borders of Sutton, NE; granddaughters, Jennifer and husband Josh Coulter of Evans, CO; Stephanie and husband Jake Harms of Hildreth, NE; great-grandsons, Levi and Alex Coulter both of Evans, CO. She was preceded in death by her parents and sister and brother-in-law, Leola and Bud Hesselgesser.

The family of Mildred D. Griess created this Life Tributes page to make it easy to share your memories.

Send flowers to the Griess family.