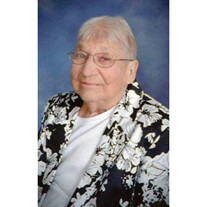 Former Fairfield resident, Opal B. Wallenberg, 91, passed away Wednesday, April 27, 2016, at Mary Lanning Healthcare in Hastings, NE. Funeral services will be 2:00 p.m., Monday, May 2, 2016, at McLaughlin Funeral Chapel in Clay Center, NE with Rev. Benjamin Seibert officiating. Interment will follow at the Fairfield Cemetery in Fairfield, NE. Visitation will be Sunday, from 2 p.m. - 8 p.m., with the family present from 2 p.m. - 4 p.m., at McLaughlin Funeral Chapel in Clay Center, NE. Memorial contributions may be directed to Peace Lutheran Church in Hastings, NE or the Fairfield American Legion Auxiliary. Opal was born October 3, 1924, to Frank E. and Pearl I. (Anderson) Watts in Champion, NE. The family later moved to Nelson, NE and then to Deweese, NE. She received her education in Champion and Deweese. On September 1, 1949, she was united in marriage to George Walllenberg and they spent their married life in Fairfield. Opal worked at the farm and as a waitress for many years. In 2009, she moved to Hastings, NE and made her home with her sister. She was a member of the Fairfield American Legion Auxiliary, the V.F.W. in Hastings, NE and Peace Lutheran Church in Hastings. Opal is survived by her sister and brother-in-law, Deloris and Ray Getz of Hastings, NE; numerous nieces, nephews, friends and special friends, Dale and Karen Bauman; Janet Johnson and Mary Bischoff. She was preceded in death by her parents; husband; 2 brothers and 2 sisters.

The family of Opal B. Wallenberg created this Life Tributes page to make it easy to share your memories.

Send flowers to the Wallenberg family.