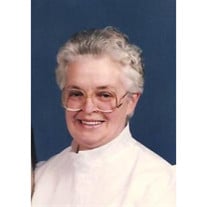 Sutton resident Patsy Jean Reutzel, 76, died Saturday, January 5, 2013, at the Henderson Community Hospital in Henderson, NE. Funeral services will be 2:00 p.m., Wednesday, January 9, 2013, at Sutton Memorial Chapel in Sutton, NE with Rev. Travis King officiating. Interment will follow at the Sutton Cemetery. Visitation with family present will be Tuesday, January 8, 2013, from 1 p.m. until 8 p.m. at Sutton Memorial Chapel. Memorial contributions may be directed to the Sutton Community Home or to the American Legion Argonne Post #61. Patsy was born May 14, 1936, in York, Nebraska to Dietrich and Francis (Stewart) Peters. She was raised by her grandmother Lorene Stewart in McCool Junction, Nebraska. Patsy graduated from McCool Junction High School in 1954. After graduation from high school she worked in Cody, Nebraska helping a family care for small children for a year before returning to McCool Junction prior to her marriage. Patsy married Carrol Reutzel on September 30, 1955. They lived and farmed in the Sutton and O'Neill areas for several years. Patsy was a member of the Salem United Methodist Church in Sutton for many years. She enjoyed embroidering baby quilts for all of her grandchildren and great grandchildren. Patsy was an avid reader of Janette Oke and Christian books. She enjoyed having family near and sharing time together cooking and reminiscing. Patsy is survived by son and daughter-in-law Kenneth and Cynthia Reutzel of Harvard, NE; daughters and sons-in-law, Barbara and David Stuckey of Grafton, NE; Diann and William Weese of Mountain View, AR; Janet McLean of Columbus, NE; 8 grandchildren; 5 great-grandchildren; half brother and sister-in-law, David and Karen Peters of York, NE; extended family members including Ardell and Lillian Reutzel of Topeka, KS; Glenda Reutzel of Norfolk, NE; Ronald and Norma King of Trumbull, NE; and numerous nieces and nephews. Patsy was preceded in death by her parents, husband, and infant son Timothy.

The family of Patsy Jean Reutzel created this Life Tributes page to make it easy to share your memories.

Send flowers to the Reutzel family.