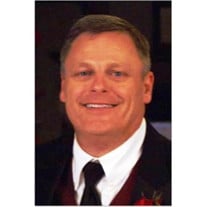 A Celebration of Dick's life will be held at the Clay Center Christian Church with Pastor Nathan Brands officiating on Monday, July 20, 2015 at 10:30 a.m. with burial following at Clay Center Cemetery. Visitation will be held at McLaughlin Funeral Chapel in Clay Center, NE, on Sunday, July 19, 2015, 1:00 p.m. - 4:00 p.m. with the family being present to greet friends. In lieu of flowers memorials may be directed to Make-A-Wish Foundation and/or the Wounded Warrior Project. Richard "Dick" W. Kinney, 54, of Hastings, passed away on Sunday, July 12, 2015, at Nebraska Heart Institute in Lincoln, NE surrounded by his loving family. He was born on January 27, 1961, in Superior, NE, to Wallace and Bitha (Reiman) Kinney. He was baptized at Pibel Lake in Ericson, NE. He graduated from Clay Center High School in 1979. In 1979, he married Vera Larsen and together, they had two daughters, Starlight and Jessica. Marrying Angie Smith in 1997, children Hanna and Evan joined the family. In 2008, he married Stephanie Cobb Lau, becoming much more than a stepdad to her daughters Chelsea, Hannah, and Caitlyn. Dick worked many jobs over the years. He primarily enjoyed working as a mechanic with his dear friend, Gary Porter. He later worked as a paramedic at Eastern Ambulance (now Rural Metro) in both Lincoln and Hastings, and as a phlebotomist at St. Elizabeth's Hospital in Lincoln. He also greatly enjoyed working with all the veterans at the VA Hospitals in Lincoln and Grand Island. He never tired of hearing their stories and admired their wisdom. Dick also had many unique interests. He was a technological whiz; making it impossible to visit him without tripping over a broken TV he was "just about" to work on. He loved recording music, especially the beautiful voice of his stepdaughter, Hannah. He was also incredibly passionate about the Huskers, flying, fishing, scuba diving, and politics. Above all, Dick enjoyed spending time with his family. He was a devoted husband and father, always there whenever any of his children needed him. One of his life's greatest joys was being a Papa to nine grandchildren. Life with Dick was never dull. He will be remembered for his love of Top Gun, Meat Loaf's Bat out of Hell album, thrill rides in his black Mustang convertible, hot dogs dipped in peanut butter, saltine crackers and chocolate milk, and of course, the "vanilla pudding" that turned out to be whipped butter. He is preceded in death by his father, Wallace Kinney and son-in-law, Johnny Titsworth. He is survived by his wife, Stephanie; mother, Bitha Kinney, of Harvard, NE; daughter and son-in-law, Starlight (Kinney) and Jose Fonseca, of Council Bluffs, IA; daughter, Jessica (Kinney) Mullen-Titsworth, of Hastings, NE; stepdaughters Hanna Riner, of Lincoln, NE, Chelsea Lau, of Charlottesville, VA; Hannah Lau, of Hastings, NE; and Caitlyn Lau, of Hastings, NE; stepson, Evan Riner, of Hastings, NE; sister and brother-in-law Vivian (Kinney) and Dan Sidlo, of Hastings, NE; brother and sister-in-law Michael and Renae (Metz) Kinney of Bennet, NE; grandchildren, Matthew Turvey, Joseph Turvey, Ysabel Fonseca, Eliana Fonseca, and Starlight "Bizi" Fonseca, all of Council Bluffs, IA; Jocelyn Heras, Jasara Mullen, and JaCiana Mullen, all of Hastings, NE; and Harper McClanahan of Lincoln, NE; along with many nieces, nephews, cousins, and other loving relatives and friends.

A Celebration of Dick's life will be held at the Clay Center Christian Church with Pastor Nathan Brands officiating on Monday, July 20, 2015 at 10:30 a.m. with burial following at Clay Center Cemetery. Visitation will be held at McLaughlin Funeral... View Obituary & Service Information

The family of Richard William Kinney created this Life Tributes page to make it easy to share your memories.

A Celebration of Dick&#39;s life will be held at the Clay Center...

Send flowers to the Kinney family.