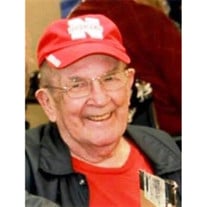 Sutton resident, Robert "Bob" Bender, 90, passed away Friday, February 5, 2016, at the Henderson Care Center in Henderson, NE. Funeral services will be 2:00 p.m., Wednesday, February 10, 2016, at Sutton Memorial Chapel with Pastor Aaron Phillips officiating. Interment will follow at the Sutton Cemetery. Visitation will be Tuesday, from 1 - 8 p.m., at Sutton Memorial Chapel in Sutton. Memorial contributions may be directed to the Henderson Care Center. Robert was born July 25, 1925, in Sutton, NE to Jacob J. and Theresa (Bender) Bender. He received his education in Sutton attending until the 8th grade. He enlisted in the United States Army on December 2, 1943, and served until he was honorably discharged on May 4, 1946. After returning from the service he met the love of his life Bonna Roberts. They were married on August 14, 1948, and to this union a daughter, Barbara Jean was born. Robert was a 69 year member of the Sutton American Legion Argonne Post # 61. He enjoyed hunting, fishing, playing aggravation, doing jigsaw puzzles, and was an avid Husker fan specifically football and baseball. He is survived by numerous nieces and nephews. He was preceded in death by his parents; wife of 59 years, Bonna; daughter, Barbara Jean; sisters, Marian and husband Ed Mitchell and Dorothy Bender; brothers-in-law and sisters-in-law, Paul and Viola Bruns; LeRoy and Francis Lindblom; Ray and Kelly Roberts and Kenneth and Doris Roberts.

The family of Robert "Bob" Bender created this Life Tributes page to make it easy to share your memories.

Send flowers to the Bender family.