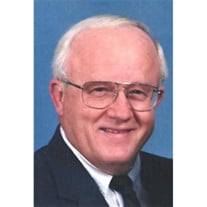 Sutton resident Robert D. Stone, 78, died Friday, March 14, 2014, at the Henderson Community Hospital in Henderson, NE. Funeral services will be 2:00 p.m., Wednesday, March 19, 2014, at the United Methodist Church in Harvard, NE with Rev. Travis King officiating. Interment will follow at the Harvard Cemetery in Harvard, NE., with military rites by the Harvard VFW Alan Jones Post #5539. Visitation will be Tuesday, March 18, 2014, from 1 p.m. - 8 p.m., with the family present from 4 p.m. - 6 p.m., at Sutton Memorial Chapel in Sutton, NE. In lieu of flowers memorial contributions may be directed to the Robert D. Stone Memorial Scholarship or the United Methodist Church in Harvard, NE. Robert D. Stone was born July 12, 1935, in Fairmont, NE to Leroy and Grace (Farrall) Stone. He received his education at Sutton and Harvard Public School graduating from Harvard in 1952. He received his bachelor's degree from Nebraska Wesleyan and continued his education and received his master's degree from Kearney State College. He married Sherol Johnson on June 24, 1956, at the Saronville United Methodist Church in Saronville, NE. He taught at Harvard Public School, Sutton Public School and Central Community College. He taught social studies and later became a principal and guidance counselor. He also taught drivers education in various schools. Robert (Bob) thoroughly enjoyed spending time with his family as well as watching his children and grandchildren participate in many activities. Rumor has it; he could even be seen at one or two sporting events. Bob was a devoted member of his church and he enjoyed singing, playing the guitar, playing cards and working on the farm. He was an avid coffee drinker and some would say he had perfect attendance at the Black Dog Diner and the Sutton Bakery. He served his country in the army during the Korean War. He was a member of the American Legion Post #5539, member of the Sutton and Harvard Education Associations and he held many positions in his church including Lay Leader and choir director. He is survived by his wife, Sherol of Sutton, NE; four children, Doug and wife Shelley Stone of Sutton, NE; Kim(Stone)Hendrickson and husband Mike of Hastings, NE; Jeff and wife Jane Stone of Phillips, NE and John and wife Shannon Stone of Harvard, NE. Grandchildren, Courtney; Brittany and Reed Stone; Crystal Steinmeyer and Amie Hendrickson; Will Reeson; Garrett, Chandler, Dustin Stone and Amanda Willnow. Great- grandchildren, Grayson and Kaylee Steinmeyer and Xavier Hendrickson. One sister, Helen Simmering of Alexandria, LA; sister-in-law, Winona Stone of Fairmont, NE; brother-in-law and sister-in-law, Virgil and Nadine Johnson and brother-in-law and sister-in-law, Don and Wanda Keller all of Harvard, NE; and many nieces and nephews. He was preceded in death by his parents, Leroy and Grace Stone; two sisters, Doris Morris and Ruth Workman; one brother, Wayne Stone; three brothers-in-law, Kenneth Morris; Wes Simmering and Norman Workman; and two grandchildren, Cody Stone and Kylie Hendrickson.

The family of Robert D. Stone created this Life Tributes page to make it easy to share your memories.

Send flowers to the Stone family.